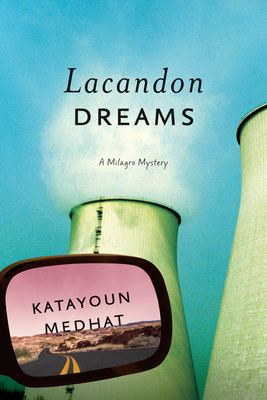 Welcome to Milagro, a small Southwestern town nestled between mountains, mesas and desert badlands; home to the good, the bad and the conflicted. Meet Franz Kafka, aka K, unlikely officer of the law, the most conflicted of them all. In this dystopian world, Big Energy is f ted for fracking the life out of San Matteo County, a teenager's mysterious vanishing is callously ignored, all the sheriff's men are out training schoolteachers in arms proficiency, and the mighty melting pot is a witches' cauldron of intercultural discontent. Super-sleuth Navajo cop Robbie Begay's unconventional methods help K take on the bad guys, and K finds unexpected solace in an old Lacandon woman's dreams.
Selected reviews of The Quality of Mercy, book 1 of the Lacandon Mysteries
Tony Hillerman fans will welcome Medhat's excellent debut and series launch, a refreshing take on Navajo country's crime, culture, and history. ...Medhat, who holds a Ph.D. in medical anthropology, uses pathos and humor, tragedy and comedy, to spin an entertaining and original\ mystery.--Publishers Weekly starred review
Crimes, cops, and communities that don't respect each other's cultural differences--all sound current and familiar. In...The Quality of Mercy, one police officer, an outsider to the Southwest, works to solve the murder of yet another young Navajo man as feelings of distrust mount among people who live together and need to depend on each other. In this fast-paced story, some people worry that nothing will change, and that one more person will get away with murder. For readers who don't know much about the Navajo, Medhat provides insight into their culture, past and present.... Like the rearview mirror on the cover reflecting a dark horizon, Medhat offers readers a chance to reflect on actions, inactions, and the lack of understanding and trust between the smaller cultural groups and the majority population.... More books featuring this winning character would be welcome. --Rain Taxi Review of Books
It is... a buddy novel, a work of history and collective and inter-generational trauma, a play with genre, from noir...to road movie with a nod through the rear-view mirror to Hunter S. Thompson. It deals with the pragmatics and compromises of daily living in a land that is far less than promised, its institutions deeply flawed. It is nevertheless a novel of kindness, depth and generosity, and it is under no illusions both as to the best as well as to the worst of what we can be.--European Journal of Psychotherapy and Counseling
A New Crimefighting Duo is Born.--Durango Herald
A fine Navajoland whodunit.--Four Corners Free Press
About the Author: Katayoun Medhat was raised in Iran and Germany, studied anthropology in Berlin and London, and worked in an adolescent psychiatric unit, learning much about human resilience. She practiced as an intercultural psychotherapist before earning her PhD in medical anthropology, which led her to the Navajo Nation.

Katayoun Medhat was raised in Iran and Germany, studied anthropology in Berlin and London, and worked in an adolescent psychiatric unit, learning much about human resilience. She practiced as an intercultural psychotherapist before earning her PhD in medical anthropology, which led her to the Navajo Nation.