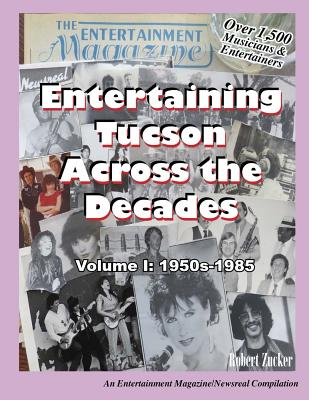 If you enjoyed Tucson, Arizona's local entertainment, anytime between the 1950s through the end of the 20th Century, then you probably will be familiar with many of these people and places. Step back into time and live, or relive, Tucson's local culture, music and entertainment scene - evolving and revolving- over five decades. The local entertainment scene in Tucson, Arizona during the 1950s through 1985 was vibrant- from the '50s rock and roll of the Dearly Beloved to the '80s with the Pills, Giant Sandworms and everything in between- classic rock, disco, alternative, punk, hard core, country, swing and Big Band. Hundreds of bands and thousands of entertainers over three decades. Within these pages are the memories and the experiences of those people and places. These are the original articles and interviews published in several local newspapers that covered the Tucson entertainment scene over the decades. Follow their stories through the years- the big breaks, record releases, hot performances and duds, break ups, tragedies, personal insights and struggles. This is the first of three volumes covering the years between 1950 and 1985. Volume II carries on the entertainment from 1986 through 1989. Volume III covers the years between 1989 through the 1990s.

Tucson native Robert Edward Zucker, born in the mid-1950s, has been publishing for nearly four decades. He has launched several Tucson, Arizona tabloid newspapers and authored dozens of manuscripts that are now being printed and digitized. While publishing over monthly 200 newspaper editions, between 1978 and 1994, Robert also organized numerous local entertainment events, concerts, movie screenings and community projects. Originally hired by the Tucson YWCA in 1977, Robert developed Youth Alternatives (1978-1979), the first newspaper for Tucson teenagers and continued the publication as Youth Awareness Press (1979-1981), and later as Tucson Teen, Tucson Teen (1981-1990) long after the original funding sources ended for the non-profit newspaper. The Magazine (1982-1985) and the Entertainment Magazine (1985-1994) published for an older audience with a focus on local entertainment. In January 1995, the Internet version of the Entertainment Magazine On Line (EMOL.org) was launched as one of the first Arizona publications to have a web presence. Robert spent a dozen years teaching desktop publishing and web publishing at the University of Arizona Department of Journalism (now School of Journalism). He spent eight years at Pima Community College serving as an instructor, developed an Internet journalism lab and spent several years as adviser for the Aztec Press, the college newspaper, as well as developed the online version of the Aztec Press (1998) and launched the UA Journalism Department (1995) and Aztec Press (1998) web sites.