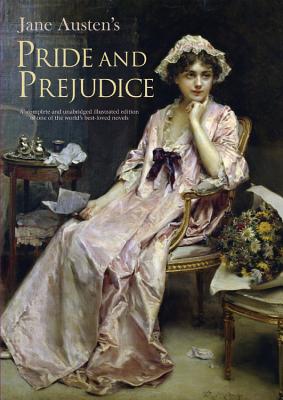 By Jane Austen, Deborah Lutz (Introduction by)
Email or call for price
Out of Print

One of the most beloved books of all time, Pride and Prejudice-Jane Austen's most popular book- has been resonating with readers since it was first published in 1813 and has been adapated many times for television, movies, and books.

When headstrong and independent Elizabeth Bennet, one of five sisters, is required to find a wealthy husband, her encounter with the arrogant Mr. Darcy leads to one of the most entertaining and satisfying courtships ever imagined. Beyond the romance, Pride and Prejudice is a book full of humor and wit that is also a commentary on upper-class social manners at the turn of the nineteenth century.

Even though it is concerned with love and marriage, the novel is a rejection of Romanticism, a popular way of imagining the world at that time. Austen preferred to highlight the rational abilities of her characters and not portray them as completely controlled by their emotions. However, the people in the book aren't robots, and Austen shows universal situations in a perfectly clear light--embarrassment when someone is foolish, the nervous feeling of falling in love, and the chagrin caused by making a big mistake.

Austen's mastery of irony, dialogue, and realism support character development and make Pride and Prejudice a pure pleasure to read. Complete and unabridged, this elegantly designed, clothbound edition features an elastic closure and a new introduction by Deborah Lutz.

Jane Austen was born in 1775 at Steventon, Hampshire. She was the seventh child of the local rector and her life, by modern standards, was uneventful. In 1801 she moved with her parents to Bath but returned to Hampshire when her father died, settling in the village of Chawton. She remained there until 1817, when she moved to Winchester to be within easy reach of her doctor. She died that year, at age forty-one, and is buried in Winchester Cathedral, which also contains a plaque in honor of her memory. Four of her novels were published anonymously in her lifetime; two more, one of which was Persuasion, appeared posthumously.

Deborah Lutz is the Morton Professor of English at the University of Louisville. Her most recent book, The Brontë Cabinet: Three Lives in Nine Objects, was shortlisted for the PEN/Weld Award for Biography. Her others books include Relics of Death in Victorian Literature and Culture; The Dangerous Lover: Gothic Villains, Byronism, and the Nineteenth-Century Seduction Narrative; and Pleasure Bound: Victorian Sex Rebels and the New Eroticism (Norton, 2011). She is the editor of the fourth Norton Critical Edition of Jane Eyre.