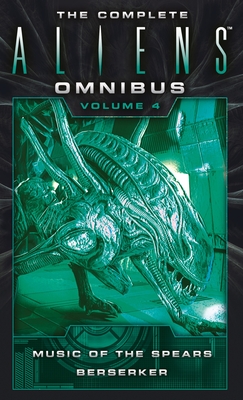 MUSIC OF THE SPEARS
by Yvonne Navarro
New York City, 2124, and the streets are swarming with Alien Jelly addicts and homeless people. The powerbrokers look down from their high-rise offices with disgust. One of them—an entertainment mogul—is planning spectacular revenge on a maniac musician. Damon Eddington will shock the world with his latest opus—the Symphony of Hate—and the unique sound he seeks for his vision of hatred is the razor-sharp scream of the Alien…
BERSERKER
by S.D. PerryIt is called a Berserker team—desperate volunteers recruited by the Company to destroy Alien infestations. Based on the spaceship Nemesis, it consists of three brutal ex-cons and the Berserker itself: an armed exoskeleton powered by the brain of what was once a human, an unstoppable killing machine. The Nemesis is sent to a space station containing the largest alien hive in history, with nearly a thousand hapless humans cocooned and incubated inside. The mission: to destroy the Aliens while leaving the terminal intact…

Yvonne Navarro is the Bram Stoker Award winning author of over twenty novels. She has written tie-ins to hit TV shows such as Buffy the Vampire Slayer and movie tie-in novels for Aliens, Hellboy, Species, Elektra and Ultraviolet. She lives in Arizona and is married to author Weston Ochse.

“The novels in these Omnibuses span the width and breadth of the Alien universe, stretching its boundaries and giving it a marvelous depth of detail” - BookRiot