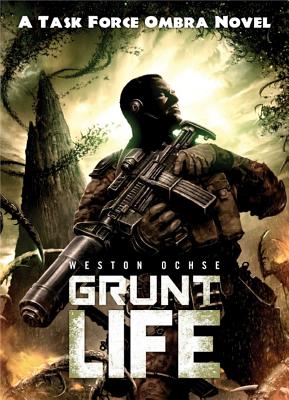 This is a brand new Military SF series from Weston Ochse, an experienced military man and author.

Benjamin Carter Mason died last night. Maybe he threw himself off a bridge into Los Angeles Harbor, or maybe he burned to death in a house fire in San Pedro; it doesn’t really matter. Today, Mason’s starting a new life. He’s back in boot camp, training for the only war left that matters a damn.

For years, their spies have been coming to Earth, mapping our cities, learning our weaknesses, leaving tragedy in their wake. Our governments knew, but they did nothing—the prospect was too awful, the costs too high—and now, the horrifying and utterly alien Cray are invading, laying waste to our cities. The human race is a heartbeat away from extinction.

That is, unless Mason, and the other men and women of Task Force OMBRA, can do anything about it.

This is a time for heroes. For killers. For Grunts.

Weston Ochse is the author of nine novels, most recently SEAL Team 666, which the New York Post called 'required reading.' His first novel, Scarecrow Gods, won the Bram Stoker Award for Superior Achievement in First Novel and his short fiction has been nominated for the Pushcart Prize. His work as appeared in comic books, and magazines such as Cemetery Dance and Soldier of Fortune.

His last name is pronounced "oaks." Together with his first name, it sounds like a stately trailer park. He lives in the Arizona desert within rock throwing distance of Mexico. For fun he races tarantula wasps and watches the black helicopters dance along the horizon.

Weston Ochse writes hard-nosed fiction with more grit and imagination than most authors could ever hope to muster. When he turns his skills to tales of the military, the words sing with the truth of personal experience.
— Christopher Golden, #1 New York Times bestselling author of SNOWBLIND

Ochse writes with assurance and confidence, and that shines through in this superb military SF novel. Brutal, bloody, and brilliant.
— Tim Lebbon, award-winning author of Coldbrook