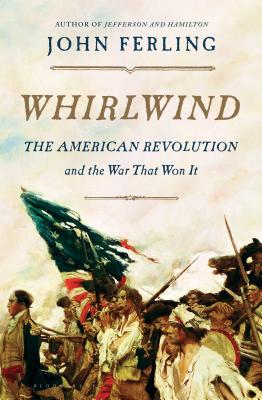 Amid a great collection of scholarship and narrative history on the Revolutionary War and the American struggle for independence, there is a gaping hole; one that John Ferling's latest book, Whirlwind, will fill. Books chronicling the Revolution have largely ranged from multivolume tomes that appeal to scholars and the most serious general readers to microhistories that necessarily gloss over swaths of Independence-era history with only cursory treatment.

Written in Ferling's engaging and narrative-driven style that made books like Independence and The Ascent of George Washington critical and commercial successes, Whirlwind is a fast-paced and scrupulously told one-volume history of this epochal time. Balancing social and political concerns of the period and perspectives of the average American revolutionary with a careful examination of the war itself, Ferling has crafted the ideal book for armchair military history buffs, a book about the causes of the American Revolution, the war that won it, and the meaning of the Revolution overall. Combining careful scholarship, arresting detail, and illustrative storytelling, Whirlwind is a unique and compelling addition to any collection of books on the American Revolution.

John Ferling is Professor Emeritus of History at the State University of West Georgia. A leading authority on American Revolutionary history, he has appeared in many documentaries and has written numerous books, including Almost a Miracle: The American Victory in the War for Independence, Adams vs. Jefferson: The Tumultuous Election of 1800, The First of Men: A Life of George Washington, Setting the World Ablaze: Washington, Adams, and Jefferson in the American Revolution, and the award-winning A Leap in the Dark: The Struggle to Create the American Republic.

“Ferling handles the conflict's ups and downs with a professorial ease, complemented by mastery of a broad spectrum of primary and secondary sources . . . He also excels at detailing the hammering out of governmental institutions from a kaleidoscope of provincial assemblies, town meetings, and church pulpits.” —Publishers Weekly

"[Ferling] seamlessly integrates the root causes of the American Revolution, the war that won it, and its larger meaning." —HistoryBookClub.com