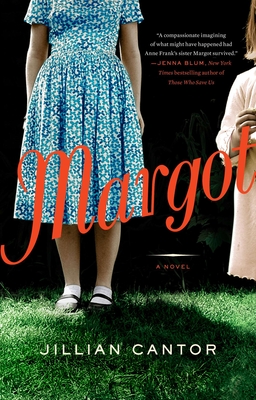 “Inventive . . . Cantor’s ‘what-if’ story combines historical fiction with mounting suspense and romance, but above all, it is an ode to the adoration and competition between sisters.” —O, the Oprah Magazine

A story of sisters that imagines Anne Frank’s sister Margot survived World War II and was living in America, from the author of The Lost Letter and The Hours Count

Anne Frank has long been a symbol of bravery and hope, but there were two sisters hidden in the annex, two young Jewish girls, one a cultural icon made famous by her published diary and the other, nearly forgotten.

In the spring of 1959, The Diary of Anne Frank has just come to the silver screen to great acclaim, and a young woman named Margie Franklin is working in Philadelphia as a secretary at a Jewish law firm. On the surface she lives a quiet life, but Margie has a secret: a life she once lived, a past and a religion she has denied, and a family and a country she left behind.

Margie Franklin is really Margot Frank, older sister of Anne, who did not die in Bergen-Belsen as reported, but who instead escaped the Nazis for America. But now, as her sister becomes a global icon, Margie’s carefully constructed American life begins to fall apart. A new relationship threatens to overtake the young love that sustained her during the war, and her past and present begin to collide. Margie is forced to come to terms with Margot, with the people she loved, and with a life swept up into the course of history.

Jillian Cantor has a B.A. in English from Penn State University and an M.F.A. from the University of Arizona, where she was also a recipient of the national Jacob K. Javits Fellowship. The author of several books for teens and adults including The Hours Count, she grew up in a suburb of Philadelphia. She currently lives in Arizona with her husband and two sons. Visit her online at www.jilliancantor.com.

“Inventive… Cantor’s ‘what-if’ story combines historical fiction with mounting suspense and romance, but above all, it is an ode to the adoration and competition between sisters.” — O, the Oprah Magazine

"A convincing, engaging might-have-been. Frankophiles will want to dig in." — People, 3 1/2 stars

“A marvelously wrought ‘what-if’ story of the survival of Anne Frank’s sister and her hidden identity in a new country. Psychologically subtle, satisfyingly suspenseful, and sensitively written.” – Margaret George, New York Times bestselling author of Elizabeth I: A Novel

“In this novel, a compassionate imagining of what might have happened had Margot Frank survived, Jillian Cantor provides more than a wistful what-if. She gives us a tour of the emotional nether land so often occupied by those who have survived the unimaginable and an example of extreme sibling competition—and love.”  — Jenna Blum, New York Times bestselling author of Those Who Save Us and The Stormchasers

“This beautifully told sister narrative is more than an intriguing what-if? It's a meditation on the nature of survivor guilt and the legacy of invisible wounds. Margot takes on big questions in an intimate story, and carefully considers whether it is possible to survive--and thrive-- after unspeakable horror. A moving, affecting novel.” — Diana Abu-Jaber, author of Crescent and Birds of Paradise

“Cantor brilliantly channels Anne Frank’s sister Margot, who survives the Holocaust horrors to hide yet again, in America, trying to forget the terrible secret that brought her here. A haunting meditation on who we really are versus who we wish we had been, regret, loss and how we love in the face of sorrow. Glowing as a rare jewel, Margot is about discovering the truths of our lives, no matter what the cost.” — Caroline Leavitt, New York Times bestselling author of Pictures of You and Is This Tomorrow

“Using historical facts and people we know and love, Cantor fills in the lost details of their lives with her imagination, and reaps a beautiful and redeeming new conclusion for a terrible chapter in history. Immediate and realistic, Margot brings Anne Frank and her sister to new life, while giving one of them a chance at a better future. The novel not only feels like a prayer for Margot and Anne, but for the many voiceless men and women whose memory deserves recognition.” — Erika Robuck, author of Call Me Zelda and Hemingway’s Girl

“This is a haunting book—emotionally raw, beautifully written, and so close to the bone that it’s jarring to remember, when you come to the end, that Margot Frank isn’t really alive and well and waiting somewhere in Philadelphia to answer all your questions. Even knowing this was a work of fiction, I was still moved to tears at seeing Margot finally get the happy ending we all wish she’d had.” — Gwen Cooper, New York Times bestselling author of Homer’s Odyssey and Love Saves the Day

“The kind of story that will leave you breathless, both because of its ambitious subject matter and its deeply arresting storytelling. Cantor has created a stunning reimagining of Anne Frank’s sister, her journey to America and the complex terrain that became her womanhood. Part love story, part family mystery, this singular, bold, and elegantly paced story is rich with historical imagery, but the ingenious plot is all Cantor’s. Margot is the sort of book that remains with you long after the final page.” — Ilie Ruby, author of The Salt God's Daughter and The Language of Trees

“Breathes life into a character we know only from her sister's famous diary. Margot offers us the other teenaged girl who lived in hiding for two years in that annex. It honors the memory of a shadow, of a ghost and boldly explores how icons are made and what is lost in this process. Margot examines history vs. story and how we cling to the fictions we tell ourselves.” —T. Greenwood, author of Two Rivers, Grace and Bodies of Water