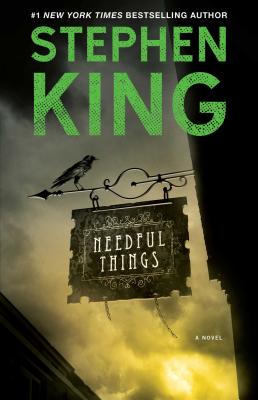 Set in the fictional town of Castle Rock, Maine

Master storyteller Stephen King presents the classic #1 New York Times bestseller about a mysterious store than can sell you whatever you desire—but not without exacting a terrible price in return.

The town of Castle Rock, Maine has seen its fair share of oddities over the years, but nothing is as peculiar as the little curio shop that’s just opened for business here. Its mysterious proprietor, Leland Gaunt, seems to have something for everyone out on display at Needful Things…interesting items that run the gamut from worthless to priceless. Nothing has a price tag in this place, but everything is certainly for sale. The heart’s desire for any resident of Castle Rock can easily be found among the curiosities…in exchange for a little money and—at the specific request of Leland Gaunt—a whole lot of menace against their fellow neighbors. Everyone in town seems willing to make a deal at Needful Things, but the devil is in the details. And no one takes heed of the little sign hanging on the wall: Caveat emptor. In other words, let the buyer beware…

Stephen King is the author of more than sixty books, all of them worldwide bestsellers. His recent work includes If It Bleeds, The Institute, Elevation, The Outsider, Sleeping Beauties (cowritten with his son Owen King), and the Bill Hodges trilogy: End of Watch, Finders Keepers, and Mr. Mercedes (an Edgar Award winner for Best Novel and an AT&T Audience Network original television series). His novel 11/22/63 was named a top ten book of 2011 by The New York Times Book Review and won the Los Angeles Times Book Prize for Mystery/Thriller. His epic works The Dark Tower, It, Pet Sematary, and Doctor Sleep are the basis for major motion pictures, with It now the highest grossing horror film of all time. He is the recipient of the 2018 PEN America Literary Service Award, the 2014 National Medal of Arts, and the 2003 National Book Foundation Medal for Distinguished Contribution to American Letters. He lives in Bangor, Maine, with his wife, novelist Tabitha King.