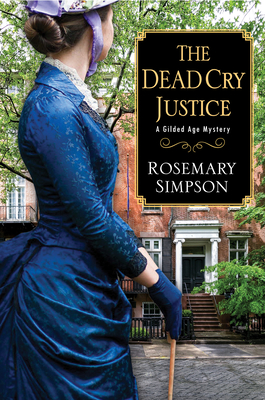 This is book number 6 in the A Gilded Age Mystery series.


May 1890: As NYU Law School finally agrees to admit female law students, Judge MacKenzie’s daughter Prudence weighs her choices carefully. Chief among her concerns is how her decision would affect the Hunter and MacKenzie Investigative Law agency and her professional and personal relationship with the partner who is currently recuperating from a near fatal shooting.

But an even more pressing issue presents itself in the form of a street urchin, whose act of petty theft inadvertently leads Prudence to a badly beaten girl he is protecting. Fearing for the girl’s life, Prudence rushes her to the Friends Refuge for the Sick Poor, run by the compassionate Charity Sloan. When the boy and girl slip out of their care and run away, Prudence suspects they are fleeing a dangerous predator and is desperate to find them.

Aided by the photographer and social reformer Jacob Riis and the famous journalist Nellie Bly, Prudence and Geoffrey scour the tenements and brothels of Five Points. Their only clue is a mysterious doll with an odd resemblance to the missing girl. But as the destitute orphans they encounter whisper the nickname of the killer who stalks them—Il diavolo—Prudence and Geoffrey must race against time to find the missing children before their merciless enemies do...

Rosemary Simpson is the author of the Gilded Age Mystery Series, as well as The Seven Hills of Paradise and Dreams and Shadows. She is a member of Sisters in Crime, International Thriller Writers, and the Historical Novel Society. Educated in France and the United States, she now lives near Tucson, Arizona and can be found online at RosemarySimpsonBooks.com.