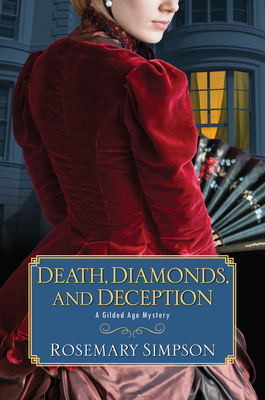 This is book number 5 in the A Gilded Age Mystery series.

Set amidst the opulent mansions and cobblestone streets of Old New York, this fifth installment in Rosemary Simpson's acclaimed series brings the Gilded Age to life, as heiress Prudence MacKenzie and ex-Pinkerton Geoffrey Hunter dash down a twisted maze from Fifth Avenue to Five Points in pursuit of stolen diamonds once belonging to Marie Antionette ...

Fall 1889: Lady Rotherton has arrived from London intent on chaperoning her niece Prudence through a New York social season to find a suitable husband. It's certainly not her niece's devilishly handsome partner in Hunter and MacKenzie Investigative Law. Aunt Gillian's eye for eligible suitors is surpassed only by her ability to discern genuine gems from nearly flawless fakes. At the Assembly Ball at Delmonico's, she effortlessly determines that the stones in the spectacular diamond waterfall necklace adorning the neck of the wife of banker William De Vries are fake.

Insisting on absolute discretion to avoid scandal, the banker employs Prudence and Geoffrey to recover the stolen diamonds pried out of their settings--priceless stones acquired by Tiffany, originally purchased for Marie Antoinette. Their search for a possible fence rapidly leads to a dead end: a jeweler brutally killed in his shop during an apparent theft.

The jeweler's murder is only the first in a string of mysterious deaths, as Prudence and Geoffrey pursue their elusive quarry. But the clues keep leading back to duplicity on the part of the De Vries family, who, it turns out, have a great deal to hide...

Rosemary Simpson is the author of the Gilded Age Mystery Series, as well as The Seven Hills of Paradise and Dreams and Shadows. She is a member of Sisters in Crime, International Thriller Writers, and the Historical Novel Society. Educated in France and the United States, she now lives near Tucson, Arizona and can be found online at RosemarySimpsonBooks.com.