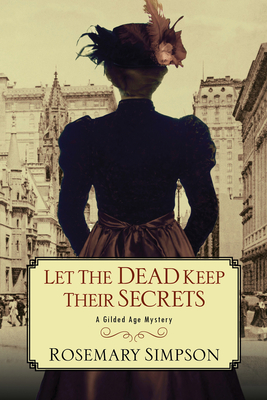 This is book number 3 in the A Gilded Age Mystery series.

In Gilded Age New York, heiress Prudence MacKenzie and ex-Pinkerton Geoffrey Hunter investigate crimes that take them from the slums of Five Points in lower Manhattan to the Fifth Avenue mansions of society's elite. In the late nineteenth century, women are particularly vulnerable . . .

Childbirth can be dangerous even for the wealthy. So when opera singer Claire Buchanan shows Prudence and Geoffrey a postmortem cabinet photograph of her deceased twin sister and newborn niece, they express sadness but not surprise. The popular black-bordered portraits are the era's way of coping with the devastating losses that plague every family. What makes this death different is that Claire is convinced Catherine and her child were murdered.

Prudence's friend is haunted by a sense of her sister's lingering presence, and by the conviction that her dead twin is demanding justice. Catherine's widower, Aaron Sorensen, is a cold, controlling man who swiftly remarried. Now his second wife is already pregnant and may be in terrible danger. In order to discover the truth and find evidence of Sorensen's guilt, Geoffrey will delve deep into his past while Prudence casts herself as his next victim—putting her own life at grave risk . . .

Praise for Lies that Comfort and Betray

“Simpson further develops an admirable heroine who refuses to take refuge in the vapors but doesn’t see that she’s met a match in her partner—though neither does he.”
—Kirkus Reviews

Rosemary Simpson is the author of two previous historical novels, The Seven Hills of Paradise and Dreams and Shadows, and two previous Gilded Age Mysteries, What the Dead Leave Behind and Lies that Comfort and Betray. She is a member of Sisters in Crime, International Thriller Writers, and the Historical Novel Society. Educated in France and the United States, she now lives near Tucson, Arizona.