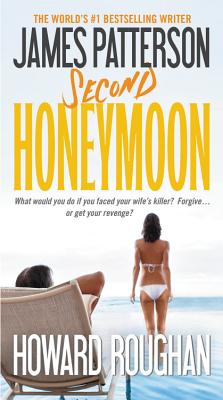 This is book number 2 in the Honeymoon series.

In James Patterson's dazzling thriller, two secret agents hunt down a serial killer targeting honeymoon couples in Rome.
A newlywed couple steps into the sauna in their deluxe honeymoon suite-and never steps out again. When another couple is killed while boarding their honeymoon flight to Rome, it becomes clear that someone is targeting honeymooners, and it's anyone's guess which happy couple is next on the list. FBI Agent John O'Hara is deep into solving the case, while Special Agent Sarah Brubaker is hunting another ingenious serial killer, whose victims all have one chilling thing in common.
As wedding hysteria rises to a frightening new level, John and Sarah work ever more closely together in a frantic attempt to decipher the logic behind two rampages. From "The Man Who Can't Miss," Second Honeymoon is the most mesmerizing, most exciting, and most surprising thriller ever (Time).

James Patterson has had more New York Times bestsellers than any other writer, ever, according to Guinness World Records. Since his first novel won the Edgar Award in 1977 James Patterson's books have sold more than 300 million copies. He is the author of the Alex Cross novels, the most popular detective series of the past twenty-five years, including Kiss the Girls and Along Came a Spider. He writes full-time and lives in Florida with his family.

"FAST-PACED, QUIRKY, AND ACTION-PACKED . . . THE DUAL STORIES PROGRESS BEAUTIFULLY ALONGSIDE EACH OTHER, and in the end we see the agents working together to solve each others' cases . . . a pleasant read."—GeishaHouse.me

"ONE OF MOST EXCITING THRILLERS I'VE HAD THE PLEASURE OF READING IN MY LIFE . . . The perfect duo of main characters, plenty of bizarre murders, elusive and cunning serial killers, and a seemingly disjointed plot which makes perfect sense when all of the pieces of the puzzle are put together."—Quick-Book-Review.blogspot.com

"AN UNEXPECTED SEQUEL TO [HONEYMOON] AND IT IS A GREAT ONE: A TRUE POTBOILER-AND I USE THAT TERM WITH THE UTMOST LOVE AND RESPECT-WITH ENOUGH ACTION, TWISTS AND TURNS TO FILL TWO BOOKS, WITH MORE LEFT OVER . . . Hopefully, [O'Hara and Brubaker] will return; fingers crossed that we don't have to wait another eight years for this to occur."—BookReporter.com

"JAMES PATTERSON HAS A PENCHANT FOR PRODUCING MURDER MYSTERY THAT IS UNRIVALLED IN THE LITERARY WORLD . . . In SECOND HONEYMOON [he] brought to life two clever murderers, each with their own reason for delivering death to those unlucky enough to cross their path."—DorsetEcho.co.uk