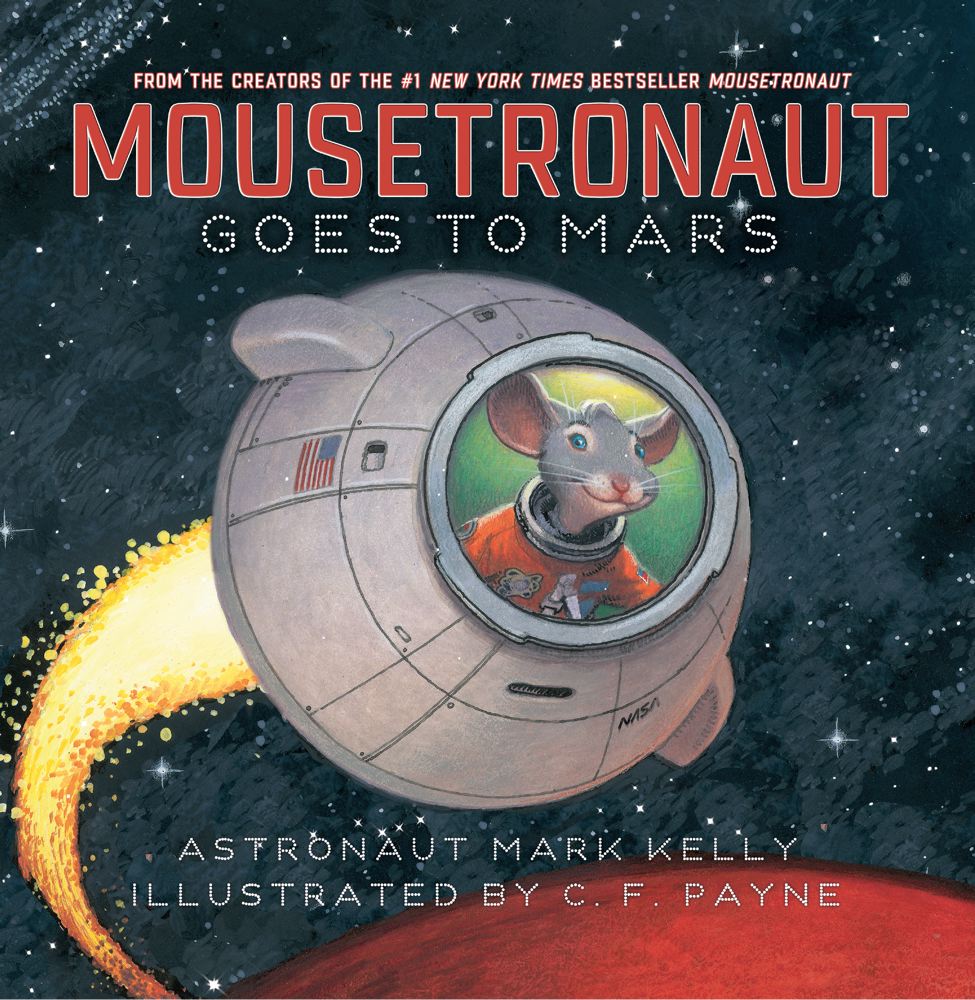 3-2-1…blast off! The smallest member of the team, a mouse named Meteor, is back on board and ready to come to the rescue on an interplanetary adventure! With lively illustrations by award-winning artist C.F. Payne, this charming new mousetronaut adventure will inspire imaginations of all sizes! Includes detailed scientific back matter.

Mark Kelly is a retired astronaut and US Navy Captain. His picture book Mousetronaut, illustrated by C.F. Payne was a #1 New York Times bestseller. He flew his first of four missions in 2001 aboard Space Shuttle Endeavour, the same space shuttle that he commanded on its final flight in May 2011. In 2020 he will be running to represent Arizona in the United States Senate.

C. F. Payne has illustrated more than a dozen picture books, including the New York Times bestselling Mousetronaut by astronaut Mark Kelly; the Texas Bluebonnet winner Shoeless Joe & Black Betsy, written by Phil Bildner; and the New York Times bestsellers The Remarkable Farkle McBride and Micawber, both by John Lithgow. He teaches at the Columbus College of Design, where he is the chair of the Illustration Department. Payne lives with his wife and children in Cincinnati, Ohio. Visit him online at CFPayne.com.

When NASA announces the crew of the upcoming Mars mission, Meteor the Mousetronaut is, shockingly, not on the list.

No matter; the little mouse isn’t about to let his training go to waste. He packs his spacesuit and stows away on the Galaxy, floating out to scavenge crumbs while the human crew sleeps. After six months, the Galaxy reaches Mars orbit—but one of the landing craft’s engines fails, and the remaining one isn’t strong enough to transport even one human. Meteor volunteers for duty and, equipped with a tiny American flag, descends to the Red Planet to gather rock samples. Six months later, he returns to Earth to be welcomed as a hero with the other astronauts. While this story inevitably lacks the freshness of Meteor’s debut (Mousetronaut, 2012), Kelly’s prose and storytelling have matured, and Meteor’s enthusiasm is as infectious as ever. Payne’s delightfully regular-looking, multiethnic and gender-inclusive crew displays the same winning combination of heroism and lumpiness (the mission commander has an endearingly potatolike face) that distinguished the first adventure. Perhaps what’s most striking about this book, though, is the four-page afterword, in which Kelly summarizes the history of Mars exploration and discusses the potential for a real manned mission. His eloquence in advocating for a vigorous space program bespeaks both passion and experience.

Rodent or no, Meteor sure is one heck of a space ambassador. (Picture book. 4-8)
— Kirkus