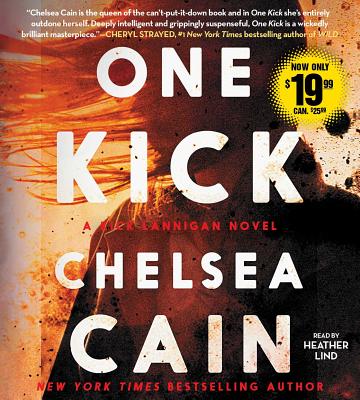 By Chelsea Cain, Heather Lind (Read by)
Email or call for price
Hard to Find

From the critically acclaimed author of the Archie Sheridan and Gretchen Lowell series, an “utterly exhilarating and emotionally rich” thriller that will have “your heart in your throat” (Megan Abbott, bestselling author of Dare Me).

Twenty-one-year-old Kick Lannigan is a survivor.

She can pick any lock, fire any weapon, throw any knife, and aim a punch at her opponent’s trachea. And when the enigmatic John Bishop shows up asking her to help him rescue missing kids, Kick has every reason to be wary. He appears to have access to limitless money, high-level contacts, and details of Kick’s background long kept sealed by the court. Yet everything he tells her about himself seems to be a lie.

Headstrong by nature, suspicious by circumstance, and a smart-ass by self-determination, Kick can’t help but see the writing on the wall: together, she and Bishop could make an unstoppable team, willing to do whatever it takes to see justice served…if they don’t kill each other first. For Kick, whose interest in child abduction is deeply personal, it’s a gamble worth taking.

Critically acclaimed as “excruciating…compelling” (Booklist, starred review) and “propulsive” (People), Gone is a high-octane and hard-hitting thriller you won’t be able to put down.