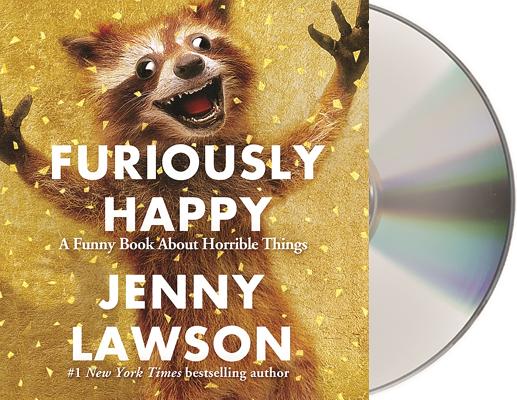 “Anyone living with depression knows that it's like being held hostage by your own brain, and sometimes survival means clinging to the knowledge that it won't last forever. Lawson takes this to the next level in Furiously Happy, her catalogue of the wonderful, ridiculous adventures that she has gone on in an effort to make the good times overshadow the bad. By fearlessly embracing her weirdness and being open about her experiences with mental illness in a culture that still largely stigmatizes and misunderstands such disorders, Lawson shines a light on what it's like to live with depression, OCD, insomnia, and anxiety. More than that, though, she shows that it is possible to fight back - even if it sometimes requires holding a midnight raccoon rodeo.”
— Marita Rivir (M), Joseph-Beth Booksellers, Cincinnati, OH

But terrible ideas are what Jenny does best.

"Some people might think that being 'furiously happy' is just an excuse to be stupid and irresponsible and invite a herd of kangaroos over to your house without telling your husband first because you suspect he would say no since he's never particularly liked kangaroos. And that would be ridiculous because no one would invite a herd of kangaroos into their house. Two is the limit. I speak from personal experience. My husband says that none is the new limit. I say he should have been clearer about that before I rented all those kangaroos.

"Most of my favorite people are dangerously fucked-up but you'd never guess because we've learned to bare it so honestly that it becomes the new normal. Like John Hughes wrote in The Breakfast Club, 'We're all pretty bizarre. Some of us are just better at hiding it.' Except go back and cross out the word 'hiding.'"

Lawson is beloved around the world for her inimitable humor and honesty, and in Furiously Happy, she is at her snort-inducing funniest. This is a book about embracing everything that makes us who we are - the beautiful and the flawed - and then using it to find joy in fantastic and outrageous ways. Because as Jenny's mom says, "Maybe 'crazy' isn't so bad after all." Sometimes crazy is just right.

JENNY LAWSON, The Bloggess, is an award-winning humor writer known for her great candor in sharing her struggle with depression and mental illness. Her two memoirs, Let's Pretend This Never Happened and Furiously Happy, were #1 New York Times bestsellers.

JENNY LAWSON, The Bloggess, is an award-winning humor writer known for her great candor in sharing her struggle with depression and mental illness. Her two memoirs, Let's Pretend This Never Happened and Furiously Happy, were #1 New York Times bestsellers.

"At turns funny and deeply moving, Lawson's accounts and genuine emotion will connect with listeners, whether they struggle with similar problems or not. A definite must-listen."-AudioFile (Earphones Award Winner)