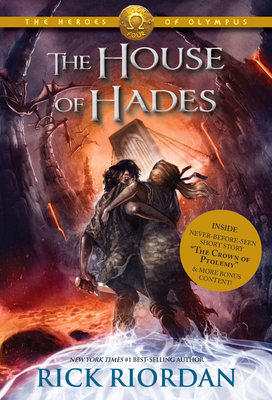 This is book number 4 in the The Heroes of Olympus series.

To begin, his dedication page was to his readers:

“To my wonderful readers:

Sorry about that last cliff-hanger.

Well, no not really. HAHAHAHA.

But seriously, I love you guys.”

I love Rick Riordan’s sense of humor in his books, and The House of Hades is no exception. There are plenty of serious moments, but the light-hearted moments make it so much more entertaining.

In the previous book, The Mark of Athena, we are left with Percy and Annabeth plunging into the depths of Tartarus. They must reach the doors of Death from Hades’ side, while others meet them on the other side of the doors.  Together, the doors must be closed to prevent Gaea’s minions from raising her and ruling the earth.  Bob the Titan is back and Percy and Annabeth would not have survived Tartarus if not for him. While Percy and Annabeth face their own challenges head-on in the Underworld, the other demigods must each face their own…and they do so amazingly. Each one grows, some of them you can literally see physical changes. Frank undergoes a tremendous growth spurt, both in stature and as a leader.  It was nice to see him step it up.  I also especially liked that Leo had some time with Calypso; it would be nice to see them back together. And Nico’s surprising revelation was totally unexpected; did not see that one coming! The subject matter was handled very well by Riordan.  I cannot wait for the next, and final installment of the Heroes of Olympus. Here’s hoping that Riordan continues with Percy and the group in another series.

At the conclusion of The Mark of Athena, Annabeth and Percy tumble into a pit leading straight to the Underworld. The other five demigods have to put aside their grief and follow Percy's instructions to find the mortal side of the Doors of Death. If they can fight their way through Gaea's forces, and Percy and Annabeth can survive the House of Hades, then the Seven will be able to seal the Doors from both sides and prevent the giants from raising Gaea. But, Leo wonders, if the Doors are sealed, how will Percy and Annabeth be able to escape? They have no choice. If the demigods don't succeed, Gaea's armies will never die. They have no time. In about a month, the Romans will march on Camp Half-Blood. The stakes are higher than ever in this adventure that dives into the depths of Tartarus.This paperback edition will include a never-before-seen short story, "The Crown of Ptolemy," in which Percy and Annabeth fight alongside Carter and Sadie Kane, and more bonus content!

Rick Riordan (www.rickriordan.com) is the author of the # 1 New York Times best-selling Percy Jackson and the Olympians series, as well as the #1 best-selling The Heroes of Olympus series, and The Kane Chronicles series. His previous novels for adults include the hugely popular Tres Navarre series, winner of the top three awards in the mystery genre. He lives in Boston, Massachusetts with his wife and two sons.

"In this adventure, victories are hard-won and the essence of bravery nuanced, making the journey as satisfying as it is entertaining."—<EM>Kirkus</EM>

"Fans won’t be disappointed as the cliff-hanger ending from the previous book, The Mark of Athena, leads to further exciting adventures by the intrepid demigods. . . As Annabeth and Percy struggle to survive Tantarus’s poisonous atmosphere and creatures, the other demigods must undergo harsh trials. . . but they learn and grow mentally and physically from their experiences. The heroes realize that they cannot change their parentage but they can control their legacy. Fans will be thrilled to know the series continues with The Blood of Olympus in 2014."—<EM>School Library Journal</EM>

PRAISE FOR THE LOST HERO

"Readers longing for a return to Camp Half-Blood will get their wish . . . the action scenes come frequently as the three heroic teens fight monstrous enemies in North American locales . . . Flashes of humor lighten the mood at times, but a tone of urgency and imminent danger seems as integral to this series as the last. With appealing new characters within a familiar framework, this spin-off will satisfy the demand for more."—<EM>Booklist</EM>

"With a true storyteller’s sense of pacing, Riordan creates another compelling adventure, right down to the cliff-hanger at the end. Stay tuned for volume four."--—<EM>Booklist</EM>

"Adventure fans will relish the action as their heroes confront formidable foes, while readers who have come to love the characters will enjoy following the different individuals as they take the stage in scenes that are usually dramatic, often witty, and occasionally surprising. A satisfying, penultimate entry in the Heroes of Olympus series."—<EM>Booklist Online</EM>

"With his now-trademark zero-to-60 acceleration, the author engineers a ghostly possession to set Greeks and Romans at odds and initiates the Prophecy of the Seven, hurtling Annabeth, Percy, Piper, Leo, Hazel, Frank and Jason into a pell-mell flight on the magical trireme Argo II. Here, Riordan’s infectious love for his subject matter really comes through, even as he takes some real risks with his characters. A literal cliffhanger leaves eager readers hanging; next stop: Greece—and Tartarus."—<EM>Kirkus Reviews</EM>

PRAISE FOR THE SON OF NEPTUNE

PRAISE FOR THE SON OF NEPTUNE

"Fans will find plenty to cheer about as Percy and his allies move slowly toward fulfilling the mysterious Prophecy of Seven."—<EM>Kirkus Reviews</EM>