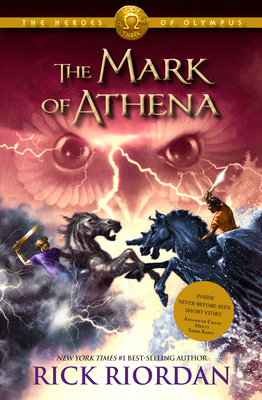 This is book number 3 in the The Heroes of Olympus series.

In The Son of Neptune, Percy, Hazel, and Frank met in Camp Jupiter, the Roman equivalent of Camp Halfblood, and traveled to the land beyond the gods to complete a dangerous quest. The third book in the Heroes of Olympus series will unite them with Jason, Piper, and Leo. But they number only six--who will complete the Prophecy of Seven?
The Greek and Roman demigods will have to cooperate in order to defeat the giants released by the Earth Mother, Gaea. Then they will have to sail together to the ancient land to find the Doors of Death. What exactly are the Doors of Death? Much of the prophecy remains a mystery. . . .With old friends and new friends joining forces, a marvelous ship, fearsome foes, and an exotic setting, The Mark of Athena is be another unforgettable adventure by master storyteller Rick Riordan.

RICK RIORDAN is the author of the New York Times #1 best-selling Percy Jackson and the Olympians series: The Lightning Thief, The Sea of Monsters, The Titan’s Curse, The Battle of the Labyrinth, and The Last Olympian. His other novels for children include the New York Times #1 best-selling series The Kane Chronicles (The Red Pyramid, The Throne of Fire, and The Serpent’s Shadow) and The Heroes of Olympus (The Lost Hero, The Son of Neptune, The Mark of Athena, and The House of Hades). He lives in Boston, Massachusetts with his wife and two sons. Learn more at www.rickriordan.com.

"Terrifying dreams and enigmatic prophecies mean danger for seven teen demigods, but also good times for fans of The Heroes of Olympus series. This third volume thrusts Percy, Jason, Annabeth, Hazel, Leo, Frank, and Piper into action once again. Throughout the novel, the juxtaposition of humor and terror makes both aspects of the writing more vivid. The demigods use their wits and their weapons skillfully in a string of encounters, and their insecurities make the characters all the more appealing. With a true storyteller’s sense of pacing, Riordan creates another compelling adventure, right down to the cliff-hanger at the end. Stay tuned for volume four."—<EM>Booklist Online</EM>

"With his now-trademark zero-to-60 acceleration, the author engineers a ghostly possession to set Greeks and Romans at odds and initiates the Prophecy of the Seven, hurtling Annabeth, Percy, Piper, Leo, Hazel, Frank and Jason into a pell-mell flight on the magical trireme Argo II. Here, Riordan’s infectious love for his subject matter really comes through, even as he takes some real risks with his characters. A literal cliffhanger leaves eager readers hanging; next stop: Greece—and Tartarus."—<EM>Kirkus Reviews</EM>