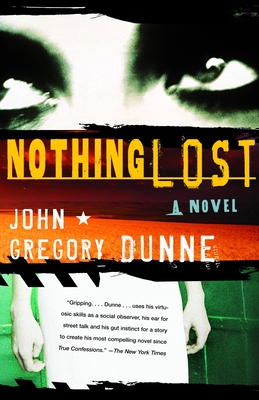 A grisly racial murder in what news commentators insist on calling “the heartland.” A feeding frenzy of mass media and seamy politics. An illicit love affair with the potential to wreck lives. In his grandly inventive last novel, John Gregory Dunne orchestrated these elements into a symphony of American violence, chicanery, and sadness.In the aftermath of Edgar Parlance’s killing, the small prairie town of Regent becomes a destination for everyone from a sociopathic teenaged supermodel to an enigmatic attorney with secret familial links to the worlds of Hollywood and organized crime. Out of their manifold convergences, their jockeying for power, publicity or love, Nothing Lost creates a drama of magnificent scope and acidity.

John Gregory Dunne wrote five other novels–Vegas; True Confessions; Dutch Shea, Jr.; The Red White and Blue; and Playland–and seven works of nonfiction , among which are the memoir-like Harp and two books that look at Hollywood, The Studio and Monster. Born in West Hartford, Connecticut, in 1932, he graduated from Princeton in 1954. He collaborated with his wife, the writer Joan Didion, on many screenplays, including Panic in Needle Park and True Confessions. John Gregory Dunne died in December 2003.

“Gripping. . . . Dunne . . . us[es] his virtuosic skills as a social observer, his ear for street talk and his gut instinct for a story to create his most compelling novel since True Confessions.” — The New York Times

“Sure-handed, ambitious, panoramic, and pungent . . . Nothing Lost is the real thing. It speaks to the American here and now more vividly and astutely than anything since Tom Wolfe’s The Bonfire of the Vanities. “ — The Washington Post Book World

“Nothing Lost harnesses a number of dark engines of power, greed, and manipulation, all of which connect in a knockout trip through our media-saturated society. . . . Sensational satire.” --Time Out New York

“A wide-ranging, shrewd and bittersweet story that will stand with the best of Dunne’s work . . . terrific . . . a serious novel disguised as brilliantly entertaining popular fiction.”
--Seattle Times

“Astonishingly wicked and deliriously well-paced. . . . Genuinely well-plotted, full of surprises, without skimping on emotional and metaphorical resonance.” –The Baltimore Sun

“Reads like a John Grisham story as rewritten by Carl Hiaasen. . . . Dunne brings his characters alive, even the outrageous ones. And he’ll leave you with a bittersweet feeling that may haunt you for a day or two. It’s that good a book.” – St. Louis Post-Dispatch

“[This] novel is fertilized with blood. And with stinging cynicism, political hypocrisy, betrayal, and, if you can imagine, worse. . . . Nothing lost by spending a few days with this splendidly dark entertainment.” –Chicago Tribune

“Sardonic, bemused and, beneath thickets of thorns, wistful. . . . Imagine F. Scott Fitzgerald and John O’Hara sitting elbow to elbow in the same bar arguing over the latest tabloid scandal and you have some idea of how Nothing Lost flows through your inner ear.” –Newsday

“Dunne effectively skewers shibboleths of both left and right while vividly delineating the hidden links between America’s elite and its forgotten underclass.” –Entertainment Weekly

“A violent, sexually charged, and, at times, acidly funny tale of power and paranoia in contemporary America.”–Library Journal (starred)

“Nothing Lost is often very funny, in ways that keep reminding us that other people’s failings aren’t wholly unlike some of our own.” –The New York Review of Books

“America was [Dunne’s] great subject, and he pursued it, depicting it, trying to contain it, allowing himself to be dazzled (but never surprised) by its malicious heart. He reveled in chicanery and folly; it gave him his voice. John Gregory Dunne was our great connoisseur of venality.” –Los Angeles Times Book Review