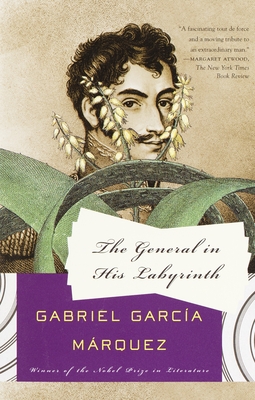 General Simon Bolivar, “the Liberator” of five South American countries, takes a last melancholy journey down the Magdalena River, revisiting cities along its shores, and reliving the triumphs, passions, and betrayals of his life. Infinitely charming, prodigiously successful in love, war and politics, he still dances with such enthusiasm and skill that his witnesses cannot believe he is ill. Aflame with memories of the power that he commanded and the dream of continental unity that eluded him, he is a moving exemplar of how much can be won—and lost—in a life.

Gabriel García Márquez was born in Colombia in 1927. He was awarded the Nobel Prize in Literature in 1982. He is the author of many works of fiction and nonfiction, including One Hundred Years of Solitude, Love In The Time Cholera, The Autumn Of The Patriarch, The General In His Labyrinth, and News Of A Kidnapping. He died in 2014.

“Passage after passage shines with the brilliance of Mr. García Márquez. . . . He has invented some of the magic characters of our age. His general, however, is not only magic, but real.” --The Wall Street Journal

“As usual, García Márquez’s craftsmanship is nothing less than superb. His General’s story is tragic; his telling of it is luminous.” --The Dallas Morning News