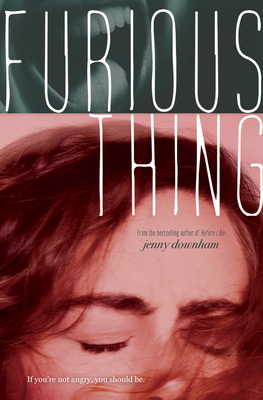 Shortlisted for the Costa Book Awards
Named as one of the best books of 2019 by the Sunday Times, Financial Times and Irish Times.

From the critically acclaimed author of Before I Die comes a remarkably affecting story of a girl who burns with anger for reasons she can't understand, and the power and risk that comes with making noise. Fans of E. Lockhart, Jennifer Niven, and Gayle Foreman will find their own fury in this exceptional novel for our times.

Lexi's angry. And it's getting worse.

If only she could stop losing her temper and behave herself, her stepfather would accept her, her mom would love her like she used to, and her stepbrother would declare his crushing desire to spend the rest of his life with her. She wants these things so badly, she's determined to swallow her anger and make her family proud.But pushing fury down doesn't make it disappear. Instead, it simmers below the surface waiting to erupt . . . And there'll be fireworks when it does.

From the bestselling and award-winning author of Before I Die, You Against Me, and Unbecoming comes a remarkably affecting story that explores the myriad of ways a girl's sense of self can be whittled away, and what might happen when she fights back.

Jenny Downham is a critically acclaimed, international bestseller. Her debut novel, Before I Die, was shortlisted for numerous awards in the UK, including the Guardian Award and the Lancashire Children's Book of the Year, was nominated for the Carnegie Medal and the Booktrust Teenage Prize, and won the Branford Boase Award. Before I Die was turned into a movie called Now is Good starring Dakota Fanning in 2012. Her most recent novel, Unbecoming, garnered four starred reviews and was an Entertainment Weekly Must List pick. Jenny lives in London with her two sons.

"A wise, gripping and skilfully told story... It gives permission to rage when fury is warranted." - Sunday Times

"One of the best YAs I have EVER READ. Full of feminist righteousness, this is a book I wish I had read when I was 16." - The Bookseller

"The sort of YA that the industry should be aiming for." - Minerva Reads

"It shows how we all have the power to protect ourselves, to stand together, to stand for what's right if we embrace our anger and fury, and refuse to let despair and sadness win." - Happiful Magazine

"[A] beautiful, funny, and heart-breaking story of family and life itself." -- Bustle

"Fluid, perfectly paced, and can be easily read in one sitting. This is a heartfelt book that sensitively and honestly reveals family issues, and it's one that teens won't want to miss." -- Bookpage, Teen Top Pick

"This beautiful rumination on the relationships between mothers and daughters should be on every woman's reading list." -- Buzzfeed