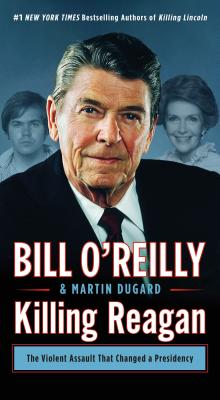 By Bill O'Reilly, Martin Dugard
$9.99
Not Yet Published

THE BESTSELLING AUTHOR AND TRAILBLAZING TV JOURNALIST recounts the career of President Ronald Reagan’S Rise to power—and the forces of evil that conspired to bring him down.

Just two months into his presidency, Ronald Reagan lay near death after John Hinckley Jr.’s bullet came within inches of his heart. His recovery was nothing short of remarkable—or so it seemed. But Reagan was grievously injured, forcing him to encounter a challenge that few men ever face. Could he silently overcome his traumatic experience while at the same time carry out the duties of the most powerful man in the world? From Reagan’s golden days of Hollywood to his term as California’s governor, the boom years in the White House to the fall of the Iron Curtain, Killing Reagan takes readers behind the scenes and headlines, creating an unforgettable portrait of one of America’s most popular presidents of all time.

“All the suspense and drama of a popular thriller.” —The Christian Science Monitor

Bill O'Reilly is a trailblazing TV journalist who has experienced unprecedented success on cable news and in writing fifteen national number-one bestselling nonfiction books. There are currently more than 17 million books in the Killing series in print. He lives on Long Island.

Martin Dugard is the New York Times bestselling author of several books of history. He and his wife live in Southern California with their three sons. With Bill O'Reilly, Martin is the coauthor of the Killing series books, including Killing Lincoln, Killing Kennedy, and Killing Jesus.