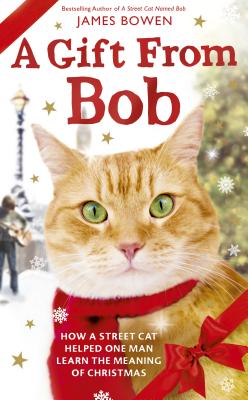 Bob Fever has swept the globe, with A Street Cat Named Bob vaulting its way to #7 on The New York Times bestseller list in its first week on sale. With rights sold to 27 countries around the globe and a top spot on the British bestseller list for more than a year, this book has been a smashing success around the world. As Street Cat Bob and James spend a cold and challenging December on the streets together, James once more draws strength and inspiration from his extraordinary cat—learning important lessons about the true meaning of Christmas along the way.

From the day James rescued a street cat abandoned in the hallway of his sheltered accommodation, they began a friendship which has transformed both their lives and, through the bestselling books A Street Cat Named Bob and The World According to Bob, touched millions around the world.

In this new story of their journey together, A Gift from Bob, James looks back at the last Christmas they spent scraping a living on the streets and how Bob helped him through one of his toughest times—providing strength, friendship and inspiration but also teaching him important lessons about the true meaning of Christmas along the way.

Readers who fell in love with Dewey and Marley, as well as the hundreds of thousands of fans who read A Street Cat Named Bob and The World According to Bob, will be eager to read the next chapters in the life of James and Bob.

JAMES BOWEN is the New York Times bestselling author of A Street Cat Named Bob. He found Bob in 2007 and the pair have been inseparable ever since. They both live in north London.

“Bowen, a London street musician turned bestselling author and YouTube sensation, shares how his life has changed since he took in an alley cat named Bob.” —People

“Bowen's sequel to the international bestseller A Street Cat Named Bob is every bit as good as the first book...At it's core The World According to Bob is an age-old and simple lesson in the ways people and the animals who love them can work everyday miracles.” —Best Friends Magazine

“This smartly balanced blend of humor, pathos, and humility makes Bowen such an engaging narrator, and it's no wonder the unlikely duo have inspired so many followers on Facebook as well as in real life. Bowen has crafted a terrific sequel to an amazing and inspiring story that's just beginning.” —Publishers Weekly (starred review) on The World According to Bob

“The author's Street Cat Named Bob climbed onto the New York Times best-seller list as it touched the hearts of cat lovers...Now comes a sequel to that beguiling book, and this human-feline team has not lost any of its extraordinariness.” —Booklist (starred review) on The World According to Bob

“A simple, heartwarming story of continued companionship and mutual trust and respect…sure to be another best-seller.” —Kirkus Reviews on The World According to Bob