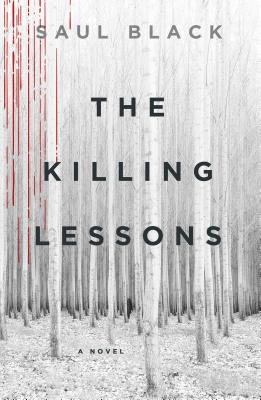 By Saul Black
Email or call for price
Out of Print

This is book number 1 in the Valerie Hart series.

"This novel breaks brilliant. It's hard to tell what's the best part of The Killing Lessons: the sweaty-palm plot that races along like a squadcar on a high-speed pursuit, the breathtaking depictions of the characters, good and bad, or author Black's inimitable style. My vote? All three." -Jeffery Deaver, New York Times bestselling author of The Skin Collector and Solitude Creek

In their isolated country house, a mother and her two children prepare to wait out a blinding snowstorm. Two violent predators walk through the door. Nothing will ever be the same.

When the two strangers turn up at Rowena Cooper's isolated Colorado farmhouse, she knows instantly that it's the end of everything. For the two haunted and driven men, on the other hand, it's just another stop on a long and bloody journey. And they still have many miles to go, and victims to sacrifice, before their work is done.
For San Francisco homicide detective Valerie Hart, their trail of victims-women abducted, tortured and left with a seemingly random series of objects inside them-has brought her from obsession to the edge of physical and psychological destruction. And she's losing hope of making a breakthrough before that happens.
But the murders at the Cooper farmhouse didn't quite go according to plan. There was a survivor, Rowena's ten-year-old daughter Nell, who now holds the key to the killings. Injured, half-frozen, terrified, Nell has only one place to go. And that place could be even more dangerous than what she's running from.
In this extraordinary, pulse-pounding debut, Saul Black takes us deep into the mind of a psychopath, and into the troubled heart of the woman determined to stop him.

Saul Black is a pseudonym for Glen Duncan, the author of By Blood We Live, I, Lucifer, and many other books. He was chosen by both Arena and The Times Literary Supplement (London) as one of Britain's best young novelists. He lives in London.

“Shockingly good writing…It’s impossible not to be swept away by its propulsive momentum. The appeal of this dark and intensely disquieting book isn’t entirely visceral either. By shifting the narrative point of view, Black allows us to peer into the depths of his many richly developed characters, from the surprisingly complex killers and their dedicated hunters to the supporting players who pop up only to be ruthlessly disposed of.” —The New York Times Book Review

“Compelling . . . graphic and disturbing. Black utilizes the psychological edge of his characters to elevate the story.” —Associated Press

“The troubled, vulnerable Valerie is a strong and believable character, and she and her colleagues amount to an unusually admiring portrait of police work… Black squeezes every last ounce of suspense out of this story. One violent climax follows another…The Killing Lessons is state of the art in the ever-darkening serial-killer genre.” —The Washington Post

“For nine months The Girl on the Train has been lauded as the best thriller of 2015, but it has some real competition with the arrival of The Killing Lessons. . . . Violent but never gratuitous, Duncan’s first crack at a thriller is a master class in suspense. Phrases like “page-turner” and “it kept me up all night!” get thrown around a lot in the book business, but The Killing Lessons is hands-down the most compelling, addictive novel I’ve read this year.” —Bookpage

“At the start of this exceptional police thriller, two armed men show up at an isolated farmhouse outside Ellinson, Colo., with fatal results for the Cooper family. . . . Readers will hope [Valerie] returns soon in another nail-biter.” —Publishers Weekly (starred)

“All of the serial-killer staples are accounted for: self-destructing detective, slippery killer, and sympathetic future victims. But Black, a pseudonym for acclaimed dark-fantasy author Glen Duncan (The Last Werewolf, 2011), twists the formula with a killer who defies the coldly calculating criminal mastermind archetype, an unblinking willingness to off characters he's convinced readers to like, and a hokum-free thread of reawakening lost souls. [A] must-read for those who like their psychological thrillers raw.” —Booklist (starred)

“A taut, smart thriller guaranteed to keep readers on the edge of their seats. Not to be missed.” —Library Journal (starred)

“Ending the rampage of two sadistic serial killers may depend on a substance-abusing homicide detective facing an old lover and an unknown nemesis in this raw and utterly readable thriller. . . . [Black] cooks up mayhem among mortals, creating a duo from Of Mice and Men by way of Thomas Harris without the fava beans.” —Kirkus Reviews (starred)

“Unbelievably good...this one has it all.” —Lee Child, New York Times bestselling author of Personal

“The Killing Lessons is a dark, twisted, and deeply compelling read. Saul Black perfectly inhabits each of his characters, even the most deranged among them, and weaves a breathless thriller that is as beautiful as it is terrifying.” —Lisa Unger, New York Times bestselling author of Crazy Love You

“This novel breaks brilliant. It's hard to tell what's the best part of The Killing Lessons: the sweaty-palm plot that races along like a squadcar on a high-speed pursuit, the breathtaking depictions of the characters, good and bad, or author Black's inimitable style. My vote? All three.” —Jeffery Deaver, New York Times bestselling author of The Skin Collector and Solitude Creek

“Completely mesmerizing! Black delivers a powerhouse of a thriller: two terrifying villains versus one damaged cop with numerous lives in the balance. Not to be missed.” —Lisa Gardner, New York Times bestselling author of Fear Nothing

“Do not read this. No reader deserves to be terrified like this.” —Linwood Barclay, New York Times bestselling author of Never Look Away and No Time for Goodbye

“If you want to ruin a perfectly good weekend with a gut-wrenching, spine-tingling, deeply disturbing, edge-of-the-seat-thrilling crime novel, The Killing Lessons is your ticket. Beware.” —Chris Pavone, New York Times bestselling author of The Expats and The Accident

“The Killing Lessons is the best thriller I've read in years. It's so realistic at times that I had to stop and catch my breath. The relationship between these two killers, and the woman who is trying to capture them, is intense and tangible. This is the first book that I've finished, then turned immediately back to page one so I could experience it all over again. It's mind-blowing, terrifying, visceral, disturbing, and gorgeously written and I've been telling everyone I know that they have to pick up this book!” —Chevy Stevens, New York Times bestselling author of That Night