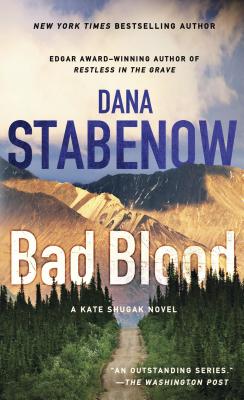 By Dana Stabenow
Email or call for price
Hard to Find

This is book number 20 in the Kate Shugak Novels series.

The Alaskan villages of Kushtaka and Kuskulana sit across the river from each other, but Kuskulana's always thrived while Kushtaka is slowly dying out. One hundred years of bad blood between the communities threaten to come to a boil when the body of a young Kushtaka ne'er-do-well is found dead—and questions of love, loyalty, and revenge rise to the surface. Could this one, unexplained death ignite an all-out war? When a second murder that looks suspiciously like payback occurs, the escalating enmity can no longer be ignored. Now it's up to private investigator Kate Shugak, along with Sergeant Jim Chopin, to find the truth about what happened…while a killer remains at large. And is on their trail…

Dana Stabenow is the New York Times bestselling author of the Kate Shugak mysteries and the Liam Campbell mysteries, as well as a few science fiction and thriller novels. Her book A Cold Day for Murder won an Edgar Award in 1994. Stabenow was born in Anchorage, Alaska and raised on a 75-foot fish tender in the Gulf of Alaska. She has a B.A. in journalism and an M.F.A. in writing from the University of Alaska. She has worked as an egg counter and bookkeeper for a seafood company, and worked on the TransAlaska pipeline before becoming a full-time writer. She continues to live in Alaska.

“A combination of fast and furious adventure and the beauty and complexity of Alaska.” —Kirkus Reviews on RESTLESS IN THE GRAVE

“In her newest Kate Shugak thriller, Stabenow proves she's as comfortable dealing with Alaskan history as she is portraying Kate's insular contemporary world and the harsh, beautiful, changing landscape she and her extended family call home… A stand-out entry in a consistently good series.” —Booklist (starred review) on THOUGH NOT DEAD

“The latest in Dana Stabenow's robust series [is] her most far-reaching Shugak story yet, ambitiously incorporating some of Alaska's colorful history.” —Seattle Times on THOUGH NOT DEAD