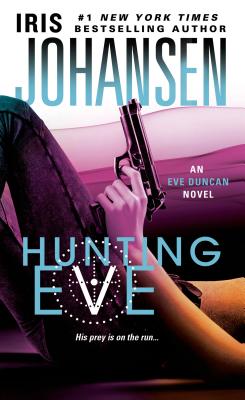 By Iris Johansen
Email or call for price
Hard to Find

EVE DUNCAN IS BACK.
THE HUNT IS ON.

A New York Times bestseller in Iris Johansen's pulse-pounding series that Kirkus Reviews calls "filled with intriguing twists and characters and an overarching mystery that will keep fans coming back."

She was taken for a reason. Chosen for her skills as a forensic sculptor. Abducted by the deranged father of a serial killer and forced to reconstruct his dead son's skull from bone fragments. Now Eve Duncan has escaped her captor—and she's running for her life. Alone. Unarmed.

In the mountains of Colorado, Eve must use all of her strength, courage, and wits to survive this madman's obsession. But Jim Doane is not the only player in the game. While Joe Quinn, Jane MacGuire, and Kendra Michaels search for Eve in the abandoned mining town that could be her ultimate refuge—or her grave—a stranger with ties to her long-ago past is closing in, circling like a wolf, and HUNTING EVE.

Iris Johansen is the New York Times bestselling author of Chasing the Night, Blood Game, Eve, and Eight Days to Live, among others. She began writing after her children left home for college, and first achieved success in the early 1980s writing category romances. In 1991, she began writing suspense historical romance novels, and in 1996 she turned to crime fiction, with which she has had great success. She lives near Atlanta, Georgia.

“Johansen expertly ratchets up the suspense as the action builds to a riveting conclusion.” —Publishers Weekly on Taking Eve

“Keeping a long-running series both intriguing and suspenseful is no easy task, but superstar Johansen makes it look that way as she kicks off another trilogy within her Eve Duncan series. Johansen wastes no time throwing Eve into the fight of her life... Johansen never misses!” —RT Book Reviews (4 ½ stars) on Taking Eve

“A successful Johansen novel, filled with intriguing twists and characters and an overarching mystery that will keep fans coming back for Book 2.” —Kirkus Reviews on Taking Eve

“A dynamically chilling start to a new trilogy in the ongoing Eve Duncan saga. The pulse-pounding plot … will keep readers glued to the pages with anticipation .” —Fresh Fiction on Taking Eve

“This is an edge of your seat, nail biting, and page turner of a book.” —Night Owl Reviews on Taking Eve

“Johansen launches a trilogy that takes the reader on an action-packed journey filled with killers and heroes, leaving readers on tenterhooks.” —Booklist on Eve

“Gripping…Johansen deftly baits the hook for the next volume.” —Publishers Weekly on Eve

“The suspense and action will entertain all, even those new to the series.” —Library Journal (starred review) on Eve

“Johansen's stories keep getting better with each installment. You will find yourself drawn to Eve and caring about what happens to her.” —Night Owl Reviews (A Top Pick) on Eve

“A superb kick off ..an excellent presentation to this fantastic series that is a one sitting read.” —Reader to Reader Reviews on Eve

“Read Eve and be hooked.” —RT Book Reviews on Eve

“The second chapter in the gut-wrenching trilogy…Johansen's intense storytelling style drags readers into a whirlpool of danger and treachery that can have horrifying results. It's awesome!” —RT Book Reviews on Quinn

“Johansen's latest has myriad twists and turns…ideal.” —Booklist on Quinn

“Johansen conducts a nail-biting excursion through madness and physical endurance in this stunning conclusion to a very popular trilogy.” —Booklist on Bonnie

“Top-notch suspense...a satisfying conclusion to the Eve and Quinn trilogy and a must-buy.” —US Daily Review on Bonnie