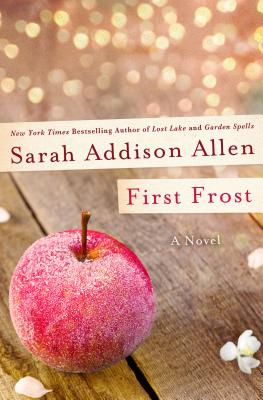 “Ten years after they first met the Waverley sisters in Allen's Garden Spells, readers catch up with Claire and Sydney, who have grown closer together and shared both life's highs and lows. They are both in love with their husbands and each is raising a spirited daughter. Old stories circle back around and information is disclosed that shakes Claire's world. Allen offers a heartwarming, funny, and welcome trip back to a family readers have come to love.”
— Valerie Koehler, Blue Willow Bookshop, Houston, TX

From the New York Times bestselling author of GARDEN SPELLS comes a story of the Waverley family, in a novel as sparkling as the first dusting of frost on new-fallen leaves...
It's October in Bascom, North Carolina, and autumn will not go quietly. As temperatures drop and leaves begin to turn, the Waverley women are made restless by the whims of their mischievous apple tree... and all the magic that swirls around it. But this year, first frost has much more in store.
Claire Waverley has started a successful new venture, Waverley's Candies. Though her handcrafted confections—rose to recall lost love, lavender to promote happiness and lemon verbena to soothe throats and minds—are singularly effective, the business of selling them is costing her the everyday joys of her family, and her belief in her own precious gifts.

Sydney Waverley, too, is losing her balance. With each passing day she longs more for a baby— a namesake for her wonderful Henry. Yet the longer she tries, the more her desire becomes an unquenchable thirst, stealing the pleasure out of the life she already has.
Sydney's daughter, Bay, has lost her heart to the boy she knows it belongs to…if only he could see it, too. But how can he, when he is so far outside her grasp that he appears to her as little more than a puff of smoke?
When a mysterious stranger shows up and challenges the very heart of their family, each of them must make choices they have never confronted before. And through it all, the Waverley sisters must search for a way to hold their family together through their troublesome season of change, waiting for that extraordinary event that is First Frost.

Lose yourself in Sarah Addison Allen's enchanting world and fall for her charmed characters in this captivating story that proves that a happily-ever-after is never the real ending to a story. It's where the real story begins.

SARAH ADDISON ALLEN is the New York Times bestselling author of Garden Spells, The Sugar Queen, The Girl Who Chased the Moon, The Peach Keeper, and Lost Lake.  She was born and raised in Asheville, North Carolina.

“You will love going to Lost Lake with Sarah Addison Allen and meeting all the fascinating characters who live there. This book is filled with mystery, magic, and wonderful surprises!” —Fannie Flagg on Lost Lake

“Lost Lake is a love note to second chances, hopeful and entrancing, and I couldn't put it down.” —Joshilyn Jackson on Lost Lake

“This imaginative, lyrical novel is an intricate web of magical misfits, Southern gothic charm and the power of new possibilities, both romantic and redemptive.” —NPR on Lost Lake

“Her eccentric cast of characters and charming Southern setting will win readers over.” —Publishers Weekly on Lost Lake

“Readers will want to release their cares and woes for full immersion in this novel's magical setting.” —Library Journal on Lost Lake

“This endearing tale of surprising second chances may just be her wisest work yet.” —Booklist (starred review) on Lost Lake

“A feast of words…This is a story of love, loss, grief, and starting over--it is truly a treat to be savored.” —RT Book Reviews on Lost Lake