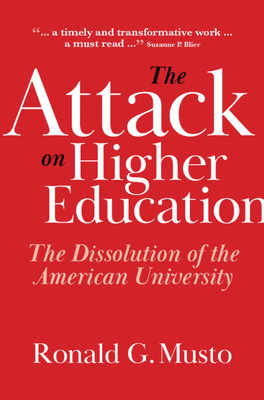 American higher education is under attack today as never before. A growing right-wing narrative portrays academia as corrupt, irrelevant, costly, and dangerous to both students and the nation. Budget cuts, attacks on liberal arts and humanities disciplines, faculty layoffs and retrenchments, technology displacements, corporatization, and campus closings have accelerated over the past decade. In this timely volume, Ronald Musto draws on historical precedent - Henry VIII's dissolution of British monasteries in the 1530s - for his study of the current threats to American higher education. He shows how a triad of forces - authority, separateness, and innovation - enabled monasteries to succeed, and then suddenly and unexpectedly to fail. Musto applies this analogy to contemporary academia. Despite higher education's vital centrality to American culture and economy, a powerful, anti-liberal narrative is severely damaging its reputation among parents, voters, and politicians. Musto offers a comprehensive account of this narrative from the mid-twentieth century to the present, as well as a new set of arguments to counter criticisms and rebuild the image of higher education.