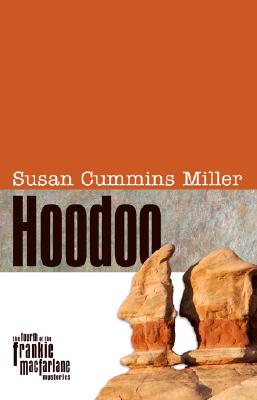 This is book number 4 in the Frankie MacFarlane Mysteries series.

Southeastern Arizona is a tinderbox. Down Under Copper’s plans to explore for minerals pit landowners, worried about their water supply and land values, against those hoping to profit from the mining venture. Someone snaps.In the traditional homeland of the Chiricahua Apaches, an environmental lawyer’s body lies in the burned wreckage of his trailer. As if in retaliation, a DUC executive is shot. Geologist Frankie MacFarlane, her students, and Joaquin Black, an old friend and local rancher, find the executive’s body in a clearing among the volcanic hoodoos of Chiricahua National Monument. And that night, near Paradise, on the eastern side of the mountain range, someone kills an ethnobotanist—a walker and puzzle maker who hasn’t spoken in years.When Frankie, Joaquin, and Joaquin’s brother Raul become suspects in the murders, Frankie must decipher interlocking puzzles to clear their names and to find the killer—or killers—before they strike again. In the process, she discovers that, contrary to geologic principles, the past is the key to the present.Miller weaves together geoscience, Western history and culture, ecology, family, and place into a compelling puzzle mystery narrated in Frankie MacFarlane’s unique voice.