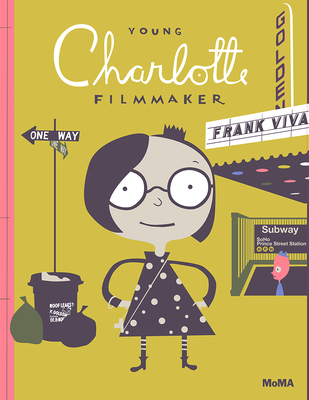 Young Charlotte is a filmmaker who loves everything that’s black and white, including spiders, penguins, and the old movies that she sees with her dad at the Golden Theatre (where the floors are sticky). With her camera at the ready wherever she goes, she finds inspiration for movies everywhere she looks. But when her colorful parents and colorful classmates just don’t “get” her, she’s ready to give up—until a lucky encounter with a film curator at The Museum of Modern Art in New York changes her perspective. Inspired by the films she sees at MoMA and stories of other pioneering directors, Charlotte gets to work. And it’s hard work! But when her movie finally premieres at the Museum, Charlotte is thrilled to be doing exactly what she loves best.

A follow-up to Frank Viva’s Young Frank, Architect and perfect for film lovers, aspiring directors, and artists of all stripes, Young Charlotte, Filmmaker is an inspiring tale.

In addition to illustrating ten New Yorker covers in the past two years, illustrator and designer Frank Viva has published two award-winning and bestselling children’s books—Along a Long Road was named one of the New York Times’ Ten Best Illustrated Books of 2011. Viva is also founder of the branding and design agency Viva & Co. and cofounder of Whigby, a stationery company. He lives in Toronto.

"Like its predecessor, it’s a playful tribute to the joys and struggles of creating art."
— Publishers Weekly

"[A]n encouragement to budding artists to think outside the box and pursue their dreams."
— Kirkus Reviews