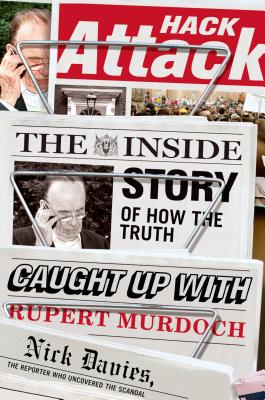 By Nick Davies
Email or call for price
Out of Print

The definitive book on how the News of the World phone-hacking scandal reached the highest echelons of power in the government, security, and media in the UK, from the journalist who broke the story.

At first, it seemed like a small story. The royal editor of the News of the World was caught listening to the voicemail messages of staff at Buckingham Palace. He and a private investigator were jailed, and the case was closed. But Nick Davies, special correspondent for The Guardian, knew that it didn't add up. He began to investigate, and ended up exposing a world of crime and cover-up, of fear and favor—the long shadow of Rupert Murdoch's media empire.

Hack Attack is the mesmerizing story of how Davies and a small group of lawyers and politicians took on one of the most powerful men in the world—and beat him. It exposes the inner workings of the ruthless machine that was the News of the World, and of the private investigators who hacked phones, listened to live calls, sent Trojan horse emails, bribed the police, and committed burglaries to dig up tabloid scoops. Above all, it is a study of the private lives of the power elite. It paints an intimate portrait of the social network that gave Murdoch privileged access to government, and allowed him and his lieutenants to intimidate anyone who stood up to them.

Spanning the course of the investigation from Davies's contact with his first source in early 2008 to the resolution of the criminal trial in June 2014, this is the definitive record of one of the major scandals of our time, written by the journalist who was there every step of the way.

Nick Davies is an award-winning investigative reporter and author of four books, including the bestselling Flat Earth News. He was the first winner of the Martha Gellhorn award for investigative reporting for his work on failing schools and recently won the award for European Journalism for his work on drugs policy. He works as a special correspondent for The Guardian.

“[I]f any one person deserves to place himself squarely at the center of this tale, it is Mr. Davies, who spent three years chipping away at a tower of lies, enduring attacks on his credibility and overcoming stonewalling of the first order to produce his account of tabloid criminality and British officialdom's role in covering it up . . . As Mr. Davies pursues his quarry, readers are introduced to the seamy underside of Fleet Street, a brutally transactional place of ‘casual treachery' where people volunteer ‘to sell the secrets of those who most trust them' . . . It's journalism noir, and it's not surprising that last week George Clooney announced that he plans to direct a film version of ‘Hack Attack' . . . As Mr. Davies puts it, ‘Power enjoys secrecy, because it increases its scope.' It takes tenacious muckrakers like Mr. Davies to upend that dynamic.” —Jo Becker, The New York Times

“There is so much excess and human pathology on display here, it makes ‘Bonfire of the Vanities' seem restrained . . . [Davies] is, as it turns out, just the kind of person you want to have on your tail. It's less about his strategic brilliance and more about an innate refusal to give up--ever.” —David Carr, The New York Times Book Review

“Hack Attack is an important reminder of the evils that can result when the media itself becomes so powerful and corrupt that it is accountable to no one--least of all to the public whose interests they are intended to serve.” —Dan Kennedy, The Boston Globe

“Davies has an astonishing tale to tell, which he deserves full credit for unearthing.” —Geoffrey Wheatcroft, The New York Review of Books

“Davies is the perfect person to corral this massive plume of facts and evasions into a single volume.” —Erik Wemple, The Washington Post

“This book is a major achievement: a master class in investigative journalism made all the more fascinating by the wealth of color that's like something from another era.” —Ray Chittum, Columbia Journalism Review

“In July, the jailing of Andy Coulson, David Cameron's former spin doctor, prompted the release of a rash of books which had been waiting on the verdict. The best is Nick Davies' Hack Attack, written with the pacing of a thriller and all the insight you'd expect from the reporter most intimately associated with the case.” —Helen Lewis, The Guardian

“Nick Davies is Britain's greatest investigative journalist . . . [Hack Attack] is as exciting as a thriller but far more important . . . This should be compulsory reading in journalism schools and must be read by anyone who wishes to understand how British politics actually works.” —Peter Oborne, The Telegraph

“Davies is known for his tenacious grip on his targets and his cutting, vivid writing style . . . Davies has crafted nothing less than a primer on how to patiently, doggedly investigate a story.” —Kirkus

“You would expect the Guardian's Nick Davies, who exposed phone hacking and other criminality among News of the World journalists, to write the best full-length account of the scandal, and so he has. He gives us not just the story . . . but also the story behind the story, explaining how and why he set about exposing the NoW's endemic criminality.” —Peter Wilby, The Guardian

“[Hack Attack] is important, not simply because it is written by a superb reporter who took on a seemingly invulnerable criminal conspiracy, or because it is . . . the best account we have of the phone-hacking scandal and the attendant police corruption and cover-ups. It is, as well, the story of modern Britain and how its standards and politics have been degraded by one man's ruthless acquisition of power. Davies has laid it all bare in an exciting, clear and honest narrative.” —Henry Porter, The Observer

“Nick Davies, the Guardian reporter who led that newspaper's lonely (at first) revelations of phone hacking at the News of the World, has, in his exhumation of this trove of journalistic ordure, done a colossal service to Britain's democracy . . . Hack Attack is the book of a very bold reporter about a passage of arms that he won, to our great benefit.” —John Lloyd, Financial Times

“In his first-hand, panoramic account of the hacking scandal from 2008 to the present day, Nick Davies artfully draws the connections between Murdoch's newspaper group and the officially powerful, and their corrosive impact on the public's interests . . . Hack Attack captures a picture of bullying and nepotism that should be absent from a democratic society.” —Martin Hickman, The Independent

“Only one reporter has dogged the story from start to finish--deeply sourced among hacking victims, journalists, lawyers, police and politicians. Davies' associates say he excels because he can comprehend the big political picture but also never forgets the vast trove of small, telling details.” —James Rainey, The Los Angeles Times

“First in The Guardian and now in this book, the reporting of Nick Davies has revealed the insidious abuse of power--and the public trust--by the Murdoch press from the top down. The British hacking scandal is the ultimate expression of Murdoch culture run amok: corruption in the Fourth Estate as dangerous to democracy as the worst excesses of heads of state.” —Carl Bernstein