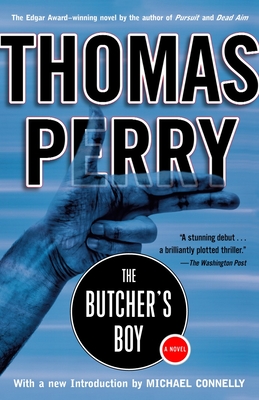 By Thomas Perry, Michael Connelly (Foreword by)
$17.00
On Our Shelves Now

Thomas Perry exploded onto the literary scene with The Butcher’s Boy. Back in print by popular demand, this spectacular debut, from a writer of “infernal ingenuity” (The New York Times Book Review), includes a new Introduction by bestselling author Michael Connelly.

Murder has always been easy for the Butcher’s Boy—it’s what he was raised to do. But when he kills the senior senator from Colorado and arrives in Las Vegas to pick up his fee, he learns that he has become a liability to his shadowy employers. His actions attract the attention of police specialists who watch the world of organized crime, but though everyone knows that something big is going on, only Elizabeth Waring, a bright young analyst in the Justice Department, works her way closer to the truth, and to the frightening man behind it.

Praise for The Butcher’s Boy

Thomas Perry won an Edgar Award for The Butcher’s Boy, and Metzger’s Dog was one of the New York Times's Notable Books of the Year. His other books include The Face-Changers, Shadow Woman, Dance for the Dead, and Vanishing Act. He lives in Southern California with his wife and two daughters.

Michael Connelly was a journalist and crime reporter for several newspapers before writing his first novel in 1992. He is the author of numerous books, including those in the bestselling Harry Bosch series. His other books include The Lincoln Lawyer, his first legal thriller; Crime Beat: A Decade of Covering Cops and Killers; and The Late Show. He is the recipient of numerous awards, including the Edgar, the Anthony, and the Macavity. Mr. Connelly lives in Florida.