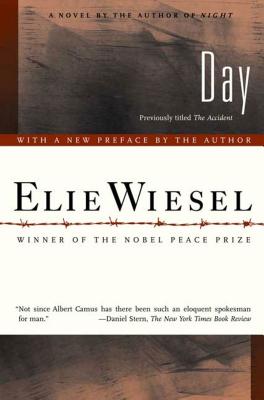 "Not since Albert Camus has there been such an eloquent spokesman for man." --The New York Times Book Review

The publication of Day restores Elie Wiesel's original title to the novel initially published in English as The Accident and clearly establishes it as the powerful conclusion to the author's classic trilogy of Holocaust literature, which includes his memoir Night and novel Dawn. "In Night it is the ‘I' who speaks," writes Wiesel. "In the other two, it is the ‘I' who listens and questions."

In its opening paragraphs, a successful journalist and Holocaust survivor steps off a New York City curb and into the path of an oncoming taxi. Consequently, most of Wiesel's masterful portrayal of one man's exploration of the historical tragedy that befell him, his family, and his people transpires in the thoughts, daydreams, and memories of the novel's narrator. Torn between choosing life or death, Day again and again returns to the guiding questions that inform Wiesel's trilogy: the meaning and worth of surviving the annihilation of a race, the effects of the Holocaust upon the modern character of the Jewish people, and the loss of one's religious faith in the face of mass murder and human extermination.

Elie Wiesel (1928-2016) is the author of more than fifty books, including Night, his harrowing account of his experiences in Nazi concentration camps. The book, first published in 1955, was selected for Oprah's Book Club in 2006, and continues to be an important reminder of man's capacity for inhumanity. Wiesel was Andrew W. Mellon Professor in the Humanities at Boston University, and lived with his family in New York City. He was awarded the Nobel Peace Prize in 1986.