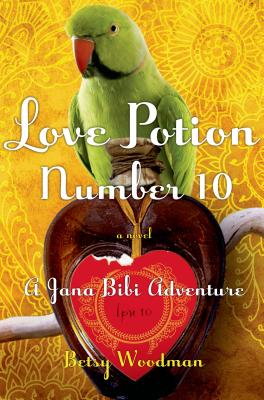 By Betsy Woodman
Email or call for price
Out of Print

This is book number 2 in the Jana Bibi Adventures series.

In the newest Jana Bibi adventure from Betsy Woodman, Jana, Mr. Ganguly, and the gang are back as their small town in India is rocked by an espionage scandal and a homemade remedy that has love on everyone's mind
The Jolly Grant House still welcomes all its visitors with the sign Jana Bibi's Excellent Fortunes hanging proudly outside its front door. Jana's fortune-telling has brought a lot of attention to the small town of Hamara Nagar, and now that the dust has settled and the town is safe from the threat of being flooded by a government dam, all eyes are on the Scottish-born card-reader Jana and her feisty, loose-beaked parrot, Mr. Ganguly. Some people, though, are not to be trusted, and Mr. Ganguly finds himself the target of a potential kidnapping that puts Jana and her household on edge.
Meanwhile, love is in the air and, thanks to Abenath's Apothecary, it's also in a bottle. Abenath has created an intoxicating brew that he calls Love Potion Number 10, which seems to have Jana in a tizzy. While she explores her newest hobby, dream interpretation, her head is swimming with questions: Is a new love possible at age fifty-nine? If so, would she ever marry again? All around her she sees different kinds of love and connection—family, arranged marriages, chemical attractions, even intercontinental romance between people who have only met through letters—so when an old flame arrives and rekindles long-gone feelings, Jana begins to think that Love Potion Number 10 just might be the magic elixir its inventor thinks it is.

Betsy Woodman is the author of Jana Bibi’s Excellent Fortunes and Love Potion Number 10. She spent ten childhood years in India, studied in France, Zambia, and the United States, and now lives in her native New Hampshire. She has contributed nonfiction pieces and several hundred book reviews to various publications, and was a writer and editor for the award-winning documentary series, Experiencing War, produced for the Library of Congress and aired on Public Radio International.

“Once again, Woodman's endearing characters and vivid picture of life in India in the early 1960s make this a book worth reading... Her second novel, like her first, reads like a cozy visit with people you feel you've known your entire life and quickly come to care about.” —Lincoln Journal Star

“With its community of quirky characters who bond together for a common cause, this delightful novel brings to mind The Best Exotic Marigold Hotel (2005).” —Booklist

“Climb straight out of your world and take a stroll to Hamara Nagar, a not quite discovered Himalayan hamlet in India in 1961, where the clock is always a couple of minutes behind the times. Miss Marple meets Paul Scott's Staying On in this charming tale of adventure and intrigue.” —Nayana Currimbhoy, author of Miss Timmins' School for Girls