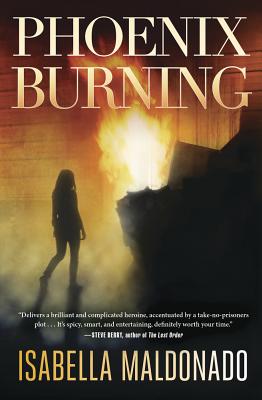 By Isabella Maldonado
Email or call for price
Hard to Find

This is book number 2 in the Veranda Cruz Mystery series.

"Maldonado's a writer to watch, and she showcases her own extensive law enforcement background in this tightly plotted police procedural."--Publishers Weekly (starred review)

The battle between Veranda Cruz and the Villalobos cartel turns Phoenix into a war zone.

Homicide Detective Veranda Cruz will stop at nothing to take down the Villalobos cartel. But when a wave of violence in the city escalates, she fears that the secrets of her past will take her down instead.

Adolfo Villalobos is a crime boss who's determined to stake his claim. To prove that he's ready to run his family's sprawling criminal empire, he devises a plan to silence his siblings and destroy Veranda, leaving a trail of destruction through downtown Phoenix that makes national headlines. Veranda believes the task force she's been assigned to lead will end the cartel's reign of terror, until Adolfo's revenge takes a cruel--and highly personal--twist.

"Maldonado, a former law enforcement officer, brings her experience and expertise to this gripping police procedural. With its gritty heroine, this action-packed mystery will attract readers who enjoy crime novels about the war on drugs."--Library Journal

"Phoenix may be burning, but Maldonado's star is rising. Gritty and gripping."--J. A. Jance, New York Times bestselling author

"Delivers a brilliant and complicated heroine, accented by a take-no-prisoners plot...It's spicy, smart, and entertaining, definitely worth your time."--Steve Berry, author of The Lost Order

Winner of the 2018 Mariposa Award for Best First Novel

"A highly entertaining police procedural . . . Maldonado rises to her written challenge to entertain, enthrall, and engage readers in this high-octane thriller."--Suspense Magazine

"A tense thriller with a strong sense of place and an insider's look at some of the most dangerous work in law enforcement."--Jan Burke, New York Times bestselling author

"The Phoenix sun isn't the only thing burning in this thrilling debut and I look forward to more."--Shannon Baker, bestselling author of the Kate Fox mystery series

"An ex-narc leads a war against a powerful crime family. The payoff is satisfying."--Kirkus Reviews