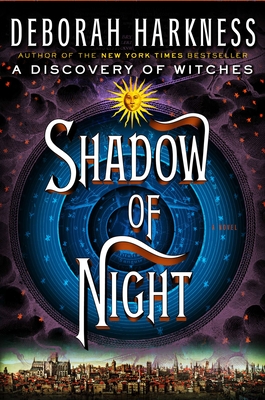 This is book number 2 in the All Souls Series series.

Deborah Harkness’ novel Shadow of Night takes us right to the moment that A Discovery of Witches ends. It was great to get right into the story and find out how the search for Ashmole 782 was progressing. Diana and Matthew travel back in time to 1590 Elizabethan England in hopes of helping Diana better understand her magic, as well as finding Ashmole 782 before it is broken. We meet interesting new characters on the adventure including Christopher Marlowe, Walter Raleigh, and Matthew’s infamous father Philippe. Things are never easy for a witch who is married to a vampire, or vice-versa. The two are constantly being judged by their fellow creatures while still trying to work out the kinks of a new marriage. However, they are determine to make things work, no matter what.

Harkness did a great job of creating Elizabeth’s England. It was so much fun to walk around the outskirts of London and the palace in Prague. I really like the secondary characters in both books. Harkness has taken the time to create and developed her side characters who are witty, funny, and just overall engaging. She has also done a fabulous job of growing Diana and Matthew as the story continues. It has been interesting to see two control freaks attempt to comprise with each other and come to terms with each others individualism. This was a fun read, although not quite as action packed as book one ,and fans will be anxiously awaiting book three.

“How fantastic to find a second book that is every bit as compelling as the first. Harkness follows up A Discovery of Witches with a tale that moves confidently around Europe at the turn of the 16th century, and has readers mingling with Marlow, Shakespeare, John Dee, Raleigh, and, of course, Elizabeth I. Espionage and intrigue tangle with magic, mythology, and religion, while hints at who may become important players in the final book of this planned trilogy left me in happy anticipation of much more intelligent entertainment to come.”
— Nicola Rooney, Nicola's Books, Ann Arbor, MI

The #1 New York Times–bestselling sequel to A Discovery of Witches, book two of the All Souls Series—“as enchanting, engrossing, and impossible to put down as its predecessor” (Miami Herald).

Look for the hit TV series “A Discovery of Witches” airing on AMC and BBC America, and streaming on Sundance Now and Shudder.

Picking up from A Discovery of Witches’ cliffhanger ending, Shadow of Night takes Diana and Matthew on a trip through time to Elizabethan London, where they are plunged into a world of spies, magic, and a coterie of Matthew’s old friends, the School of Night. As the search for Ashmole 782 deepens and Diana seeks out a witch to tutor her in magic, the net of Matthew’s past tightens around them, and they embark on a very different—and vastly more dangerous—journey.

Deborah Harkness made her fiction debut with book one of the All Souls trilogy, A Discovery of Witches, which was a New York Times bestseller and has been translated into more than thirty languages. A professor of history at the University of Southern California, Harkness has received Fulbright, Guggenheim, and National Humanities Center fellowships, and her most recent scholarly work is The Jewel House: Elizabethan London and the Scientific Revolution.

Praise for Shadow of Night

“A captivating and romantic ripping yarn.”
—E. L. James, “Books of the Year 2012: Authors Choose Their Favourites,” The Guardian

“The joy that Harkness, herself a historian, takes in visiting the past is evident on every page. . . . A great spell, the one that can enchant a reader and make a 600-page book fly through her fingertips, is cast. . . . Its enduring rewards are plenty.”
—Entertainment Weekly

“Fans of Harkness’s 2011 debut A Discovery of Witches will be delighted. . . . Harkness delivers enough romance and excitement to keep the pages turning. Readers will devour it.”
—People

“Deborah Harkness takes us places we’ve never been before. . . . Shadow of Night isn't just about wonderfully detailed descriptions of England in 1591, it's about being there. Readers time-travel as precisely and precariously as Diana and Matthew do. . . . Shadow ends as Discovery did with promises of more to come. Lucky for us.”
—USA Today

“Harkness exudes her own style of magic in making the world of late 16th century England come alive. . . . Enchanting, engrossing and as impossible to put down as its predecessor, Shadow of Night is a perfect blend of fantasy, history and romance. Its single greatest flaw is, after almost 600 pages, it’s over. If you’ve already read and enjoyed A Discovery of Witches, picking up Shadow of Night is an absolute requirement. Otherwise, pick up both, and consider your reading list complete.”
—Miami Herald

“Picking up where she left off in last year’s A Discovery of Witches, Harkness proves she’s not suffering from a sophomore slump with this addictive tale of magic, mayhem and two lovers.”
—Chicago Tribune

“This novel is as much a love story about a bygone era as it is about Matthew and Diana. It overflows with a colorful cast of characters, many of whom Harkness has plucked straight from the history books, and Harkness renders the late 1500s in exquisite detail. . . . The writing is so rich, the characters so compelling . . . and best of all, Harkness manages to execute with aplomb the act of answering old questions while posing new ones that will intensify anticipation for the final installment. Readers who have been counting down the days, take heart: The wait was most assuredly worth it.”
—BookPage

Praise for A Discovery of Witches:

“A wonderfully imaginative grown-up fantasy with all the magic of Harry Potter or Twilight. . . . An irresistible tale of wizardry, science and forbidden love.”

“Romantic, erudite, and suspenseful . . . Harkness attends to every scholarly and emotional detail with whimsy, sensuality, and humor.”

“A thoroughly grown-up novel packed with gorgeous historical detail and a gutsy, brainy heroine to match. . . . Harkness writes with thrilling gusto about the magical world.”

“Harkness conjures up a scintillating paranormal story. . . . Discover why everyone’s talking about this magical book.”

“Delightfully well-crafted and enchantingly imaginative . . . It has some of the same ineluctable atmosphere that made Anne Rice’s vampire books such a popular success.”

“A debut novel with a big supernatural canvas . . . Its ambitions are world-sized, ranging across history and zeroing in on DNA, human and otherwordly. Age-old tensions between science and magic and between evolution and alchemy erupt as Diana seeks to unlock the secrets of Ashmole 782.”

“Harkness, an eloquent writer, conjures this world of witches with Ivy League degrees and supernatural creatures completely—and believably—while maintaining a sense of wonder. . . . A Discovery of Witches is that rare historical novel that manages to be as intelligent as it is romantic. And it is supernatural fiction that those of us who usually prefer to stay grounded in reality can get caught up in. Pardon the pun, but Witches is truly spellbinding.”

“Readers who thrilled to Elizabeth Kostova’s 2005 blockbuster, The Historian, will note the parallels, but A Discovery of Witches is a modern Romeo and Juliet story, with older, wiser lovers. Blood will flow when a witch and a vampire fall for each other. Author Deborah Harkness, a UCLA history professor, brings vast knowledge and research to the page.”

“Harkness works her own form of literary alchemy by deftly blending fantasy, romance, history, and horror into one completely bewitching book.”

“A Discovery of Witches becomes increasingly charming as it goes along. . . . A shrewdly written romp and a satisfying snow-day read for those of us who heartily enjoyed the likes of Anne Rice and Marion Zimmer Bradley. By the book’s rousing end . . . I was impatient for the sequel.”

“A captivating tale that will ensnare the heart and imagination of even the most skeptical reader. This fantastic first novel will leave you anxious for the next installment, and sad to leave the remarkable world Harkness has created. Simply put, A Discovery of Witches is literary magic at its most potent.”

“Set in our contemporary world with a magical twist, this sparkling debut by a history professor features a large cast of fascinating characters, and readers will find themselves invested in Diana’s success at unlocking the secrets of the manuscript. . . . Harkness is an author to watch.” —Library Journal (starred review)

“Harkness creates a compelling and sweeping tale that moves from Oxford to Paris to upstate New York and into both Diana and Matthew’s complex families and histories. All her characters are fully fleshed and unique.”

“Harkness brings this world to vibrant life and makes the most of the growing popularity of gothic adventure with an ending that keeps the Old Lodge door wide open.”

“A Discovery of Witches is a strange and wonderful novel of forbidden love and ancient spells that turns every preconception about magic on its head. Deborah Harkness has written one of the most exciting novels I’ve read in years. . . . I fell in love with it from the very first page.” —Danielle Trussoni, author of Angelology

“Deborah Harkness’s novel is a brilliant synthesis of magic and history. A gripping story of dangerous passion, intellectual intrigue, and fantastical beings.” —Ivy Pochoda, author of The Art of Disappearing