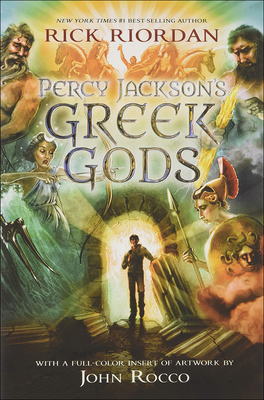 A publisher in New York asked me to write down what I know about the Greek gods, and I was like, Can we do this anonymously? Because I don't need the Olympians mad at me again. But if it helps you to know your Greek gods, and survive an encounter with them if they ever show up in your face, then I guess writing all this down will be my good deed for the week.
So begins Percy Jackson's Greek Gods, in which the son of Poseidon adds his own magic--and sarcastic asides--to the classics. He explains how the world was created, then gives readers his personal take on a who's who of ancients, from Apollo to Zeus. Percy does not hold back. "If you like horror shows, blood baths, lying, stealing, backstabbing, and cannibalism, then read on, because it definitely was a Golden Age for all that."
This novel-sized paperback, complete with an insert of full-color illustrations by Caldecott Honoree John Rocco, is portable and friendly, and the ideal way to introduce young readers to the classic stories. Praise for Percy Jackson's Greek Gods "Percy's gift, which is no great secret, is to breathe new life into the gods. Closest attention is paid to the Olympians, but Riordan has a sure touch when it comes to fitting much into a small space-as does Rocco's artwork, which smokes and writhes on the page as if hit by lightning. . .The inevitable go-to for Percy's legions of fans who want the stories behind his stories."
-Kirkus Reviews
"The age-old stories are endlessly strong, resonant, and surprising, while the telling here is fresh, irreverent, and amusing. Percy's voice. . . John Rocco illustrates the myths with drama, verve, and clarity. A must-have addition to the Percy Jackson canon."
-Booklist Online
"Combining the sarcasm and wit of Percy Jackson with the original Greek myths is a great way to hook tweens and teens on the stories without boring them. The beautiful illustrations by John Rocco enhance each story. . ."
-VOYA.

Rick Riordan (www.rickriordan.com) is the author of the # 1 New York Times best-selling Percy Jackson and the Olympians series, as well as the #1 best-selling The Heroes of Olympus series, and The Kane Chronicles series. His previous novels for adults include the hugely popular Tres Navarre series, winner of the top three awards in the mystery genre. He lives in Boston, Massachusetts with his wife and two sons.