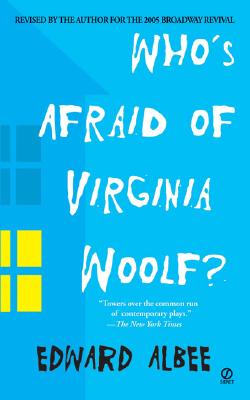 By Edward Albee
$7.99
On Our Shelves Now

“Twelve times a week,” answered Uta Hagen, when asked how often she’d like to play Martha in Who’s Afraid of Virginia Woolf? Like her, audiences and critics alike could not get enough of Edward Albee’s masterful play. A dark comedy, it portrays husband and wife George and Martha in a searing night of dangerous fun and games. By the evening’s end, a stunning, almost unbearable revelation provides a climax that has shocked audiences for years. With the play’s razor-sharp dialogue and the stripping away of social pretense, Newsweek rightly foresaw Who’s Afraid of Virginia Woolf? as “a brilliantly original work of art—an excoriating theatrical experience, surging with shocks of recognition and dramatic fire [that] will be igniting Broadway for some time to come.”

Edward Albee, the American dramatist, was born in 1928. He has written and directed some of the best plays in contemporary American theatre and three of his plays: A Delicate Balance, Seascape and Three Tall Women have received Pulitzer Prizes. His most famous play, Who's Afraid of Virginia Woolf? won the New York Drama Critics Circle Award for Best Play. His other plays include The Zoo Story, The Death of Bessie Smith, The Sandbox, The American Dream, Tiny Alice, All Over, Listening, The Lady from Dubuque, The Man Who Had Three Arms, Finding the Sun, Fragments, Marriage Play and The Lorca Play.