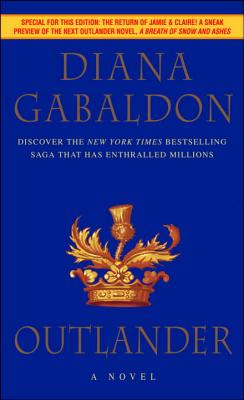 Diana Gabaldon's Outlander: This is the first book in the series and takes place in Scotland in both the mid twentieth-century and the mid eighteenth-century. Claire travels back to 1743 Scotland and is thrown into the world of intrigues and spies. Not only does she have to adjust to a new social/political life, but she finds herself falling for a warrior even though she is married back in 1945. This book was wonderful. It is full of details and emotions that will make you want to quickly continue on in the series.

Claire Randall is leading a double life. She has a husband in one century, and a lover in another...
In 1945, Claire Randall, a former combat nurse, is back from the war and reunited with her husband on a second honeymoon--when she innocently touches a boulder in one of the ancient stone circles that dot the British Isles. Suddenly she is a Sassenach--an "outlander"--in a Scotland torn by war and raiding border clans in the year of our Lord...1743.
Hurled back in time by forces she cannot understand, Claire's destiny in soon inextricably intertwined with Clan MacKenzie and the forbidden Castle Leoch. She is catapulted without warning into the intrigues of lairds and spies that may threaten her life ...and shatter her heart. For here, James Fraser, a gallant young Scots warrior, shows her a passion so fierce and a love so absolute that Claire becomes a woman torn between fidelity and desire...and between two vastly different men in two irreconcilable lives.

"From the Hardcover edition."