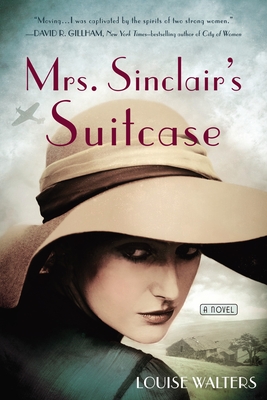 “Working in a used bookstore, Roberta has a habit of keeping letters or notes she may discover in the used books she receives. One day, her father brings her an old suitcase filled with books that belonged to her grandmother. In one of the books, Roberta finds a letter written by her grandfather to her grandmother, months after he supposedly died in the war, referencing a dark secret from over 70 years ago. A story of love lost, secret love, and love found, set in the English countryside during WWII and in a bookstore in modern England, Mrs. Sinclair's Suitcase had me hooked with the simple line, 'In wartime, people become desperate.'”
— Sylvia Smith (E), Bookmiser, Inc., Roswell, GA

A heartbreaking and deeply compelling debut, Mrs. Sinclair’s Suitcase is a compulsive page-turner about thwarted love, dashed hopes, and family secrets—book-club fiction at its best.

Roberta, a lonely thirty-four-year-old bibliophile, works at The Old and New Bookshop in England. When she finds a letter inside her centenarian grandmother’s battered old suitcase that hints at a dark secret, her understanding of her family’s history is completely upturned. Running alongside Roberta’s narrative is that of her grandmother, Dorothy, as a forty-year-old childless woman desperate for motherhood during the early years of World War II. After a chance encounter with a Polish war pilot, Dorothy believes she’s finally found happiness, but must instead make an unthinkable decision whose consequences forever change the framework of her family.

The parallel stories of Roberta and Dorothy unravel over the course of eighty years as they both make their own ways through secrets, lies, sacrifices, and love. Utterly absorbing, Mrs. Sinclair’s Suitcase is a spellbinding tale of two worlds, one shattered by secrets and the other by the truth.

Louise Walters lives in Northamptonshire with her husband and five children. Mrs. Sinclair's Suitcase is her first novel.

“A solid debut . . . [that] may appeal to those who have also liked bookishly romantic stories such as Mary Ann Shaffer and Annie Barrows’s The Guernsey Literary and Potato Peel Pie Society or Gabrielle Zevin’s The Storied Life of A.J. Fikry.” – Library Journal

“A riveting debut with an impeccably researched past and charismatic present-day voices. Mrs. Sinclair’s Suitcase is like opening a literary treasure chest, full of sharp-edged gems glittering with all the beauty and heartache of humanity. You’re sure to carry this story with you wherever you go. I know I will.” —Sarah McCoy, author of the New York Times and international bestseller The Baker’s Daughter and The Mapmaker’s Children

“A moving reminder that history is not just a pageant of world-shaking events, but a weave of individual lives that are often as inspiring as they are tragic.” —David R. Gillham, author of the New York Times–bestseller City of Women

“Vivid and seductive, the tale begins in a blazing crash in World War II and twists through a tangle of mysterious circumstances, misunderstandings, and repressed desires. Irresistible . . .” —Karen Mack and Jennifer Kaufman, authors of the national bestseller Freud’s Mistress

“Like forgotten letters and photos tucked inside secondhand books, secrets hide within the pages of Mrs. Sinclair’s Suitcase. Louise Walters has crafted a heartbreaking story of love and all its faces.” —Jessica Brockmole, author of Letters from Skye

“Walters creates a totally absorbing world, and takes you right into the heart of her story. Beautifully done, and heartbreaking, too.” —Esther Freud, author of The Sea House and Hideous Kinky

“A first novel of great charm and assurance, beautifully told and utterly gripping.” —The Times (UK)