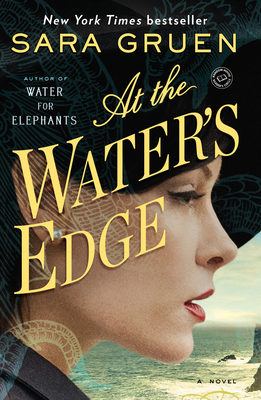 “A trio of privileged Philadelphia socialites -- Maddie, her husband, Ellis, and their friend, Hank -- travel to the Scottish Highlands during WWII to prove the existence of the Loch Ness Monster. There, they find themselves among villagers dealing with the atrocities of a war that they have blithely ignored, and Maddie discovers that both the world and her life are not at all what she had imagined. Full of great period detail and richly drawn settings, At the Water's Edge is another spellbinding tale from the author of Water For Elephants.”
— Jill Miner, Saturn Booksellers, Gaylord, MI

NEW YORK TIMES BESTSELLER • In this thrilling new novel from the author of Water for Elephants, Sara Gruen again demonstrates her talent for creating spellbinding period pieces. At the Water’s Edge is a gripping and poignant love story about a privileged young woman’s awakening as she experiences the devastation of World War II in a tiny village in the Scottish Highlands.

After disgracing themselves at a high society New Year’s Eve party in Philadelphia in 1944, Madeline Hyde and her husband, Ellis, are cut off financially by his father, a former army colonel who is already ashamed of his son’s inability to serve in the war. When Ellis and his best friend, Hank, decide that the only way to regain the Colonel’s favor is to succeed where the Colonel very publicly failed—by hunting down the famous Loch Ness monster—Maddie reluctantly follows them across the Atlantic, leaving her sheltered world behind.

The trio find themselves in a remote village in the Scottish Highlands, where the locals have nothing but contempt for the privileged interlopers. Maddie is left on her own at the isolated inn, where food is rationed, fuel is scarce, and a knock from the postman can bring tragic news. Yet she finds herself falling in love with the stark beauty and subtle magic of the Scottish countryside. Gradually she comes to know the villagers, and the friendships she forms with two young women open her up to a larger world than she knew existed. Maddie begins to see that nothing is as it first appears: the values she holds dear prove unsustainable, and monsters lurk where they are least expected.

As she embraces a fuller sense of who she might be, Maddie becomes aware not only of the dark forces around her, but of life’s beauty and surprising possibilities.

Praise for At the Water’s Edge

“Breathtaking . . . a daring story of adventure, friendship, and love in the shadow of WWII.”—Harper’s Bazaar

“A page-turner of a novel that rollicks along with crisp historical detail.”—Fort Worth Star-Telegram

“Gruen is a master at the period piece—and [this] novel is just another stunning example of that craft.”—Glamour

Sara Gruen is the #1 New York Times and USA Today bestselling author of At the Water's Edge, Water for Elephants, Ape House, Riding Lessons, and Flying Changes. Her works have been translated into forty-three languages and have sold more than ten million copies worldwide. Water for Elephants was adapted into a major motion picture starring Reese Witherspoon, Rob Pattinson, and Christoph Waltz in 2011. She lives in western North Carolina with her husband and three sons, along with their dogs, cats, horses, birds, and the world’s fussiest goat.

“Breathtaking . . . a daring story of adventure, friendship, and love in the shadow of WWII.”—Harper’s Bazaar

“A page-turner of a novel that rollicks along with crisp historical detail.”—Fort Worth Star-Telegram

“Gruen is a master at the period piece—and [this] novel is just another stunning example of that craft.”—Glamour

“A compelling, enthralling read, a novel which captivates and rewards, paying off in a series of emotional and narrative twists . . . comfort reading of the highest order.”—The Globe and Mail

“[Gruen] conveys the lure of the Scottish Highlands. . . . At the Water’s Edge captivates with its drama, intrigue and glimpses of both the dark and light of humanity.”—BookPage

“A heartwarming story about life, and the places it can potentially take you.”—InStyle

“A natural for the book-club set.”—Booklist

“If I needed a reminder why I am such a fan of Sara Gruen’s books, her latest novel provides plenty. Unique in its setting and scope, this impeccably researched historical fiction is full of the gorgeous prose I’ve come to expect from this author. And even after the final page, its message still resonates with me: The monsters we seek may be right in front of us. In fact, the only fault I can find with this book is that I’ve already finished it.”—Jodi Picoult, New York Times bestselling author of Leaving Time

“I devoured this book. Once again Sara Gruen has proven herself to be one of America’s most compelling storytellers. You might be tempted to rush to get to the answers at the end—but don’t, or you’ll miss the delectable journey that is Gruen’s prose.”—Kathryn Stockett, New York Times bestselling author of The Help

“Magical . . . At the Water’s Edge skillfully transports us to a small, tenacious Scottish village in the grip of war, and into the heart of Madeline Hyde, a woman who is a stranger to herself until forces convene to rock her awake. Sara Gruen is a wizard at capturing the essence of her historical setting, and does so here in spades, but it’s Maddie’s unexpected transformation that grounds and drives the novel. As her husband and best friend search the surface of the Loch, desperate for a sign of the elusive creature, Maddie learns to plumb her own depths, and comes fully alive to the world around her.”—Paula McLain, New York Times bestselling author of The Paris Wife