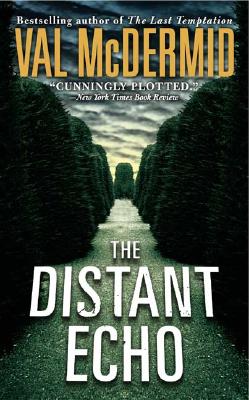 By Val McDermid
Email or call for price
Hard to Find

"Bestselling, award-winning author Val McDermid delivers her most stunning story yet in" The Distant Echo"---an intricate, thought-provoking tale of murder and revenge"

It was a winter morning in 1978, that the body of a young barmaid was discovered in the snow banks of a Scottish cemetery. The only suspects in her brutal murder were the four young men who found her: Alex Gilbey and his three best friends. With no evidence but her blood
on their hands, no one was ever charged.

Twenty five years later, the Cold Case file on Rosie Duff has been reopened. For Alex and his friends, the investigation has also opened old wounds, haunting memories-and new fears. For a stranger has emerged from the shadows with his own ideas about justice. And revenge.

When two of Alex's friends die under suspicious circumstances, Alex knows that he and his innocent family are the next targets. And there's only way to save them: return to the cold-blooded past and uncover the startling truth about the murder. For there lies the identity of an avenging killer...

Val McDermid grew up in a Scottish mining community and then read English at Oxford. She was a journalist for sixteen years and is now a full-time writer and lives in South Manchester. In 1995, she won the Gold Dagger Award for Best Crime Novel of the Year for "The Mermaids Singing." Her novel "A Place of Execution" won a" Los Angeles Times" Book Prize, was nominated for the Edgar Award for Best Novel, and named a "New York Times" Notable Book of the Year.

"Cunningly plotted...McDermid administers the venom drop by drop...Individually the characters are sensitively drawn. Collectively, they present the inscrutable face of closed-off communities so terrified of change they would kill for peace."--New York Times Book Review

"This absorbing pychological novel of revenge shows British author McDermid at the top of her form...outstanding pacing, character and plot development, plus evocative place descriptions, make this another winner."--Publishers Weekly (starred review)

"If you still haven't absorbed the fact that Val McDermid is writing at the top of anyone's game, here's another chance to join the celebration...her clean, crisp writing, especially about crime science, might just remind you of the early books of P.D. James." -Chicago Tribune

"McDermid, whose reputation and popularity are growing incrementally with each new book, is very like P.D. James in her masterful mixing of forensic science with brisk plots and in-depth characterization." -Booklist (star review)