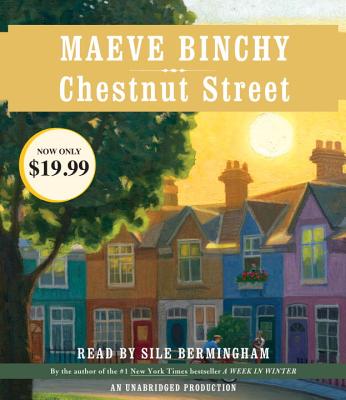 By Maeve Binchy, Sile Bermingham (Read by)
Email or call for price
Hard to Find

Maeve Binchy imagined a street in Dublin with many characters coming and going, and every once in a while she would write about one of these people. She would then put it in a drawer; “for the future,” she would say. The future is now.

Across town from St. Jarlath’s Crescent, featured in Minding Frankie, is Chestnut Street, where neighbors come and go. Behind their closed doors we encounter very different people with different life circumstances, occupations, and sensibilities. Some of the unforgettable characters lovingly brought to life by Binchy are Bucket Maguire, the window cleaner, who must do more than he bargained for to protect his son; Nessa Byrne, whose aunt visits from  America every summer and turns the house—and Nessa’s world—upside down; Lilian, the generous girl with the big heart and a fiancé whom no one approves of; Melly, whose gossip about the neighbors helps Madame Magic, a self-styled fortune-teller, get everyone on the right track; Dolly, who discovers more about her perfect mother than she ever wanted to know; and Molly, who learns the cure for sleeplessness from her pen pal from Chicago . . .

Chestnut Street is written with the humor and understanding that are earmarks of Maeve Binchy’s extraordinary work and, once again, she warms our hearts with her storytelling.

Maeve Binchy is the author of Maeve’s Times: In Her Own Words, and many bestselling novels, including A Week in Winter, Minding Frankie, Heart and Soul, Whitethorn Woods, Circle of Friends and Tara Road, which was an Oprah’s Book Club selection. Married to Gordon Snell, she lived in Dalkey, Ireland, until her death in 2012.

“[The] prose is lyrical, carrying the reader along like a lullaby. . . Each tale offers a lesson about our preconceived notions and prejudices, themes that have been a Binchy hallmark. . . For Maeve Binchy fans, Chestnut Street is a gift bequeathed to the reader.” —Mary Cadden, USA Today

“Has everything that makes Binchy special, in small delicious bites; her ability to capture human nature, describe individual life arcs, and breathe life into characters and settings really shines in these stories. . . . Chestnut Street is fictional, but the characters are very real. It’s Binchy’s gift, this ability to tell stories through characters we recognize, can relate to, want to know. . . We believe in her world, and the people she populates it with. They may be very Irish, and often concern themselves with Irish issues—but at heart, the problems are human and universal.” —Bobbi Dumas, NPR

“Short stories that reflect a sunnier but not saccharine take on life are literature’s rewards for time spent reading on the dark side. And Maeve Binchy’s Chestnut Street is such a reward. . . [These stories] reflect Binchy’s generous spirit and realism about human frailty, never ignoring it but always empathizing with its cause. . . . Though only a few pages long, each story is a complete and always perceptive narrative. . . . Binchy’s collection constitutes a bittersweet parting gift from a storyteller who understood the ‘strange justice of the world’ that shapes lives wherever they live. She is greatly missed.” —Judith Chettle, Richmond Times-Dispatch

“As befits a Binchy book, this one is packed with charming takes on people’s quirks and foibles, nosy neighbors and friendly ones. Binchy eloquently exposes and explores relationships between parents and children, husbands and wives, longtime and recently acquired friends.” —Daneet Steffens, The Boston Globe

“No one commits any murders or changes the course of world history. Instead, ordinary people deal with relatable problems, conveyed in compassionate, unadorned prose. . . . Here, as in her novels, Binchy’s humor furnishes a lot of the charm.” —Kathy Ewing, Cleveland Plain Dealer

“Here, life’s problems, blessings, landmarks and tragedies all happen in many and varied ways. And thankfully, Maeve Binchy’s touch is apparent in each and every story. She will be sorely missed in the world of storytelling.” —Kate Ayers, Bookreporter.com

“Gives us one last extraordinary look at ordinary people as they struggle with family relationships, romances gone awry, and the possibility for a better future. . . . One finds here insightful observations about human nature—all with Binchy’s thoughtful and loving touch that will be sorely missed.” —Publishers Weekly

“Binchy was well-known for creating realistic characters who interact in ordinary ways, in ordinary places. . . . Her many fans are sure to line up to read this.” —Booklist

“A posthumous collection of loosely linked stories from the much cherished Irish writer who died in 2012. . . . For Binchy aficionados, a late indulgence.” —Kirkus Reviews