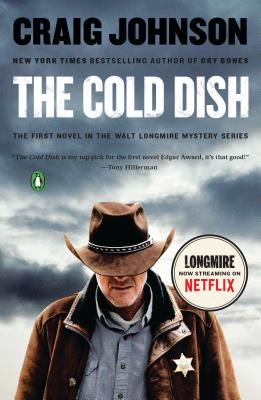 This is book number 1 in the A Longmire Mystery series.

Cold Dish by Craig Johnson is a fabulous beginning to an excellent series. Sheriff Walt Longmire is just starting to claw his way back from the black hole of grief, which means he is able to function in society but that is about the extend of his capabilities. After the brutal raping of a young girl, Longmire discovers that the assailants are being murdered. Now he has to determine who the culprit is, in a town that is already horrified and enraged by the initial crime. Johnson creates remarkable characters that are funny, clever, and well developed. He has such a wonderful writing style that you immediately feel an affinity for the characters. It is so easy to pick-up his books and instantly get sucked into the lives of the characters. I have also been liking his main character, Longmire. He has a dry, sarcastic humor that often leaves me chuckling. His progression from overcoming the trauma of his wife’s death to being able to go out into the world and reconnect with people has also be fascinating. Not only has Johnson created memorable characters, but his stories are gripping psychological thrillers that will leave you wondering who did it. Also, if you haven’t already, watch the TV show based on the books.

Fans of Ace Atkins, Nevada Barr and Robert B. Parker will love this outstanding first novel, in which New York Times bestselling author Craig Johnson introduces Sheriff Walt Longmire of Wyoming’s Absaroka County. Johnson draws on his deep attachment to the American West to produce a literary mystery of stunning authenticity, and full of memorable characters. After twenty-five years as sheriff of Absaroka County, Walt Longmire’s hopes of finishing out his tenure in peace are dashed when Cody Pritchard is found dead near the Northern Cheyenne Reservation. Two years earlier, Cody has been one of four high school boys given suspended sentences for raping a local Cheyenne girl. Somebody, it would seem, is seeking vengeance, and Longmire might be the only thing standing between the three remaining boys and a Sharps .45-70 rifle.

With lifelong friend Henry Standing Bear, Deputy Victoria Moretti, and a cast of characters both tragic and humorous enough to fill in the vast emptiness of the high plains, Walt Longmire attempts to see that revenge, a dish best served cold, is never served at all.

"We in the West have a major new talent on our hands." —The Denver Post

"A winning piece of work, and a convincing feel to the whole package." —The Washington Post

"Craig Johnson does it right, with style, grace, wildfire pace, and a sense of humor." —Bob Shacochis


Praise for Craig Johnson and the Walt Longmire Mystery Series

"It's the scenery—and the big guy standing in front of the scenery—that keeps us coming back to Craig Johnson's lean and leathery mysteries." —The New York Times Book Review

"Johnson's hero only gets better—both at solving cases and at hooking readers—with age." —Publishers Weekly

"Like the greatest crime novelists, Johnson is a student of human nature. Walt Longmire is strong but fallible, a man whose devil-may-care stoicism masks a heightened sensitivity to the horrors he's witnessed." —Los Angeles Times

"Johnson's trademarks [are] great characters, witty banter, serious sleuthing, and a love of Wyoming bigger than a stack of derelict cars." —The Boston Globe

"The characters talk straight from the hip and the Wyoming landscape is its own kind of eloquence." —The New York Times

"[Walt Longmire] is an easy man to like. . . . Johnson evokes the rugged landscape with reverential prose, lending a heady atmosphere to his story." —The Philadelphia Inquirer

"Stepping into Walt's world is like slipping on a favorite pair of slippers, and it's where those slippers lead that provides a thrill. Johnson pens a series that should become a 'must' read, so curl up, get comfortable, and enjoy the ride." —The Denver Post

"Johnson's pacing is tight and his dialogue snaps." —Entertainment Weekly