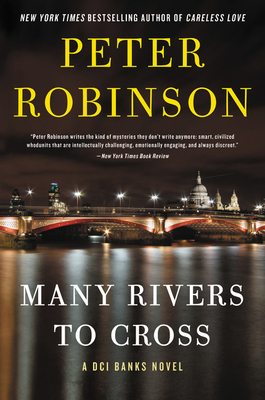 This is book number 26 in the Inspector Banks Novels series.

Peter Robinson, the acclaimed author of the bestselling series Stephen King calls “the best now on the market,” returns with a gripping, emotionally charged mystery in which the revered detective Alan Banks must find the truth about a murder with possible racial overtones—and save a friend from ruin.

In Eastvale, a young Middle Eastern boy is found dead, his body stuffed into a wheelie bin on the East Side Estate. Detective Superintendent Alan Banks and his team know they must tread carefully to solve this sensitive case, but tensions rise when they learn that the victim was stabbed somewhere else and dumped. Who is the boy, and where did he come from?

Then, in a decayed area of Eastvale scheduled for redevelopment, a heroin addict is found dead. Was this just another tragic overdose, or something darker?

To prevent tensions from reaching a boiling point, Banks must find answers quickly. Yet just when he needs to be at his sharpest, the seasoned detective finds himself distracted by a close friend’s increasingly precarious situation. Banks needs a break—and gets one when he finds a connection to a real estate developer who could be the key to finding the truth.

With so many loose ends dangling, there is one thing Banks is sure of—solving the case will come at a terrible cost.

“Robinson is an author with amazing empathy, a snare-trap ear for dialogue, and a clear eye for the telling detail.”
— Michael Connelly

"Reliable procedural entertainment from a pro’s pro, with an ending that guarantees more drama ahead.”
— Kirkus Reviews on Many Rivers to Cross

“Well-written and believable, with recognizable but multifaceted characters and enough twists to keep the story riveting until the mystery is solved.”
— Library Journal on Careless Love

“Engrossing... Those who enjoy methodical police procedurals that build to a logical, satisfying conclusion will be amply rewarded.”
— Publishers Weekly on Careless Love

“Careless Love is another entertaining novel in the Inspector Banks series.”
— The Hamilton Spectator on Careless Love

“As usual, Robinson provides a solid police procedural enhanced by the rugged Yorkshire setting. Banks himself—jazz and solitude-loving, difficult, somewhat melancholic, unlucky in love—is always fascinating... [F]or series fans, this one is a sure bet.”
— Booklist on Careless Love