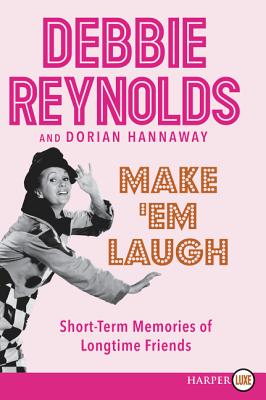 The beloved Hollywood star and New York Times bestselling author of Unsinkable continues her intimate chat with fans in this entertaining collection of anecdotes, stories, jokes, and random musings from a woman who has seen it all—and done most of it.

From her acclaimed performances to her headline-making divorce from Eddie Fisher, raising a famous daughter to hitting the road with a successful one-woman show, Debbie Reynolds was in the spotlight for decades. Over her more than six-decade-long career she met presidents, performed for the Queen of England, and partied with kings.

In this fabulous personal tour, she recalls wonderful moments with the greats of the entertainment world—Lucille Ball, Frank Sinatra, Bette Davis, Phyllis Diller, and many, many more—sharing stories that shed new light on her life and career and the glittering world of Hollywood then and now. Debbie has plenty to tell—and in Make ’Em Laugh, she dishes it in the warm, down-to-earth voice her fans adore.

Debbie shares memories of late night pals and some of the greatest comedians of all time, stories from the big screen and small, and tales of marriage, motherhood, and children. Combining her wicked sense of humor and appealing charm, she reveals the personal side of show business and fame in funny, poignant, and delightful reminiscences. Nothing is off limits: Debbie talks about her sex life, her family drama—and even shares a few secret recipes.

A true Hollywood icon, beloved by millions of fans around the world, Debbie Reynolds died on December 28, 2016, at the age of 84, just one day after the death of her daughter, actress and author Carrie Fisher.

Debbie Reynolds was an actress, comedienne, singer, dancer, and author best known for her leading roles in Singin' in the Rain and The Unsinkable Molly Brown, and on TV as Bobbi Adler in Will & Grace. After more than sixty years in the entertainment industry, she was a true Hollywood icon, beloved by millions of fans of all ages around the world. Debbie Reynolds died on December 28, 2016, at the age of 84, just one day after the death of her daughter, actress and author Carrie Fisher.

Dorian Hannaway was the director of late-night programming at CBS-TV for more than fifteen years, supervising the production of The Late Show with David Letterman; The Kids in the Hall; and The Late, Late Show. She has known Debbie for more than thirty years, and has written and produced many projects with her.

“A frothy collection of stories and gossip from the comedic actress....Names drop like snowflakes, glistening in the sunny terrain of this exuberant memoir.”
— Kirkus Reviews

“If I learned nothing else from my mom—and I learned quite a bit, though her sex tips left something to be desired, so to speak—it was this: ‘Life is hilarious—especially when it’s not—because that’s the only time it truly has to be.’”
— Carrie Fisher

“Debbie Reynolds is one of our country’s most gifted and original actresses . . . literally a force of nature.”
— Carl Reiner

“This book is just like Debbie—affectionate, unforgettable, and laugh-out-loud funny. I loved it and I love her.”
— Mitzi Gaynor

“These rich, often illuminating, anecdotes read much like a catalogue of the memorabilia that Reynolds sold off over the last few years. The stories not only augment the gaps left in Unsinkable but also act as an elegy to the ever-fading memories of Hollywood’s golden era.”
— Washington Post

“Debbie is my favorite woman on earth - and again, I apologize for breaking her rib!”
— Roseanne Barr

“Who knew Debbie Reynolds could take down a running back like me? Incidentally, I enjoyed it. She is great.”
— Regis Philbin

“Anyone who loves Hollywood and movies is bound to enjoy this lively, funny book, filled with candid recollections. Debbie was a movie-struck kid who experienced the last days of Hollywood’s Golden Age, and I love her clear-eyed memories.”
— Leonard Maltin

“[Reynolds is] indisputably a grand dame of show business.”
— NPR on UNSINKABLE

“Debbie Reynolds knows exactly how to steal the scene, wring tears, and most important, how to leave the audience feeling thoroughly entertained.”
— New York Journal of Books on UNSINKABLE

“Nothing could sink this lady.”
— New York Post on UNSINKABLE