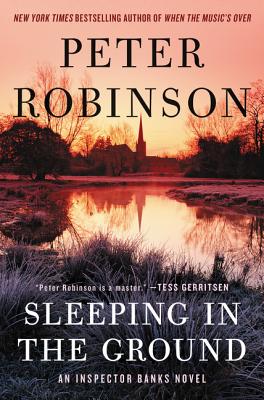 This is book number 24 in the Inspector Banks Novels series.

MICHAEL CONNELLY calls Peter Robinson "an author with amazing empathy, a snare-trap ear for dialogue, and a clear eye for the telling detail."

See why in Sleeping in the Ground, the gripping new novel starring Alan Banks — featuring an opening scene you'll never forget, and a finale you won't see coming.

At the doors of a charming country church, an unspeakable act destroys a wedding party. A huge manhunt ensues. The culprit is captured. The story is over.

Except it isn't. For Alan Banks, still struggling with a tragic loss of his own, there's something wrong about this case — something unresolved. Reteaming with profiler Jenny Fuller, the relentless detective deeper into the crime... deep enough to unearth long-buried secrets that reshape everything Banks thought he knew about the events outside that chapel.

And when at last the shocking truth becomes clear, it's almost too late.

Packed with twists and turns, heart and soul, this is another triumph from an author "at the top of his game" (LOUISE PENNY).

“The best series now on the market. Try one and tell me I’m wrong.”
— Stephen King

“A mighty force to be reckoned with in crime fiction.”
— Publishers Weekly

“Robinson’s interrogations... have the rare quality of steadily illuminating and thickening both the speakers and their subjects. The result is a slow-burning intensity that deepens from beginning to end.”
— Kirkus Reviews

“A gripping tale that brings to mind not only old-time Hollywood but also British ‘golden age’ storytelling in the Agatha Christie and Daphne du Maurier tradition.”
— Wall Street Journal