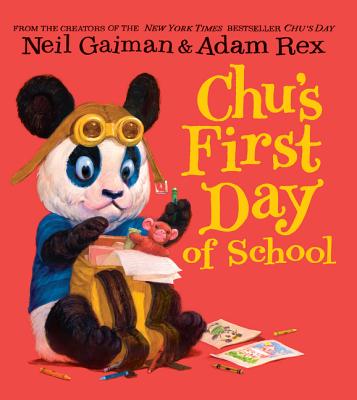 Chu, the adorable panda with a great big sneeze, is heading off for his first day of school, and he's nervous. He hopes the other boys and girls will be nice. Will they like him? What will happen at school? And will Chu do what he does best?

Chu's First Day of School is a perfect read-aloud story about the universal experience of starting school.

Neil Gaiman is a #1 New York Times bestselling author of books for children and adults whose award-winning titles include Norse Mythology, American Gods, The Graveyard Book, Good Omens (with Terry Pratchett), Coraline, and The Sandman graphic novels. Neil Gaiman is a Goodwill Ambassador for UNHCR and Professor in the Arts at Bard College.

Adam Rex is the author of many books, including Cold Cereal and Unlucky Charms, the first two books in the Cold Cereal Saga; the New York Times bestselling picture books The Legend of Rock Paper Scissors and Frankenstein Makes a Sandwich; the middle grade novel The True Meaning of Smekday (now a major motion picture from Dreamworks, Home); and the teen novel Fat Vampire. He lives in Arizona with his wife.

A charming title that is sure to leave kids wanting more--more Chu and more readings of this whimsical tale.
— School Library Journal