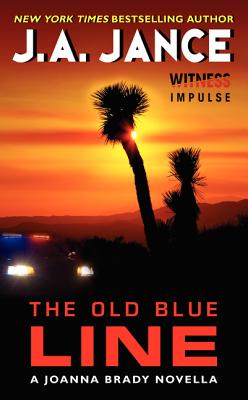 Butch Dixon has been taken for a ride …

Not a jump in the car, see the sights kind of ride. He's been taken for everything he has. He's lost his house, his restaurant business, his savings, his car, his best friend, his faith—all to his conniving ex-wife. But that was seven years ago. He picked himself up, left Chicago, and started over in Peoria, Arizona, running the Roundhouse Bar and Grill. He doesn't look back on those bad years; there's no point. Not until two curious cops show up at the Roundhouse.

Faith, Butch's ex-wife, has been murdered, and the evidence points to him. Stunned, Butch quickly realizes that the black-hearted woman is going to ruin him again, from her grave. Lucky for Butch, the Old Blue Line, a group of retired—but still sharp and tenacious—former legal and law enforcement coots, have taken it upon themselves, as a favor, to make sure he doesn't cross that thin line. After the dust settles, Butch's life is again upended—when a little red-haired ball of fire, Sheriff Joanna Brady, takes a seat at his bar.

J. A. Jance is the New York Times bestselling author of the J. P. Beaumont series, the Joanna Brady series, the Ali Reynolds series, and five interrelated thrillers about the Walker family, as well as a volume of poetry. Born in South Dakota and brought up in Bisbee, Arizona, Jance lives with her husband in Seattle, Washington, and Tucson, Arizona.