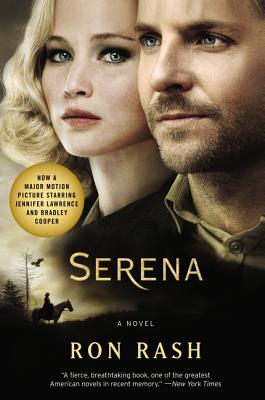 The year is 1929, and newlyweds George and Serena Pemberton arrive in North Carolina to create a timber empire. Although George has already lived in the camp long enough to father an illegitimate child, Serena is new to the mountains—but she soon shows herself to be the equal of any worker, overseeing crews, hunting rattlesnakes, even saving her husband's life in the wilderness.

Together Serena and George ruthlessly kill or vanquish all who fall out of their favor. But when Serena learns that she will never bear a child, she sets out on her own to kill the son George had without her. Mother and child begin a struggle for their lives, and when Serena suspects George is protecting his illegitimate family, the Pembertons' intense, passionate marriage starts to unravel as the story moves toward its shocking finale.

Ron Rash is the author of the 2009 PEN/Faulkner finalist and New York Times bestseller Serena and Above the Waterfall, in addition to four prizewinning novels, including The Cove, One Foot in Eden, Saints at the River, and The World Made Straight; four collections of poems; and six collections of stories, among them Burning Bright, which won the 2010 Frank O’Connor International Short Story Award, and Chemistry and Other Stories, which was a finalist for the 2007 PEN/Faulkner Award. Twice the recipient of the O. Henry Prize, he teaches at Western Carolina University.

“Beautifully written, utterly unforgettable. To my mind, this novel, as powerful and inexorable as a thunderstorm, is as good a piece of fiction as was published last year and a new classic in the category of love gone terribly wrong.”
— Anna Quindlen

“Ron Rash’s SERENA will stand as one of the major American novels of this century. It is a flat-out masterpiece-mythic, terrifying, and beautiful.”
— Lee Smith

“From the moment she steps off the train, Serena Pemberton commands center stage in Ron Rash’s rough-hewn tale of unchecked ambition. Universal in scope, frightening in its brutality, Serena is an unflinching vision of blighted souls played out against the backdrop of a nearly-lost Appalachia.”
— David Wroblewski, New York Times bestselling author of The Story of Edgar Sawtelle

“[Rash] has outdone himself. The story of this brilliant, ambitious, seductive woman is a searing tragedy of Shakespearean proportions—or, in simpler terms, a damn good book that will keep you awake far too late and, well after you’ve finished it, haunt your dreams.”
— Julia Glass, National Book Award winning author of THREE JUNES

“A powerful tale, well told, SERENA is enriched by Rash’s artful use of language. With just the right turn of phrase, dead-on details and subtle use of symbol, he delivers a story that will remain with readers long after the final page.”
— Charlotte Observer

“The opening is unforgettable…the last hundred pages are thrilling…should be a breakthrough for this masterful storyteller.”
— Kirkus Reviews (starred review)

“An Appalachian retelling of Macbeth, a thriller, a word-perfect evocation of an era and a people, a grim chapter in the history of conservation: if Serena doesn’t finally win Ron Rash the overdue attention of the national literary (and cinematic) establishments, I can’t imagine what they’re holding out for.”
— Arthur Phillips, author of Prague

“This is a must-read novel.”
— About.com (Contemporary Literature)

“Rash is a storyteller of the highest rank and SERENA confirms this from the opening sentence to the final page. An epic achievement.”
— Jeffrey Lent, bestselling author of IN THE FALL

“Ron Rash’s new novel Serena catapults him to the front ranks of the best American novelists. This novel will make a wonderful movie, and the brave actress who plays Serena is a shoe-in for an Academy Award nomination.”
— Pat Conroy

“A harrowing tour de force that might be the most timely and dangerous novel released this fall... Rash has gone beyond any Southern gothic tale to weave a complex and riveting portrait in the tradition of Gabriel Garcia Marquez...brilliantly conceived.”
— Huffington Post

“Too hypnotic to break away from...And the final chapter is as flawless and captivating as anything I’ve read this year, a perfectly creepy shock that will leave you hearing nothing but the wind between the stumps.”
— Washington Post Book World

“From that arresting opening…the violence escalates along with the tension in this absorbing story about rapacious greed in Depression-era Appalachia…Thrilling stuff.”
— People

“Masterfully written...The book is consistently heartbreaking in its portrayal of what humans are capable of…sprawling [and] engrossing.”
— San Francisco Chronicle