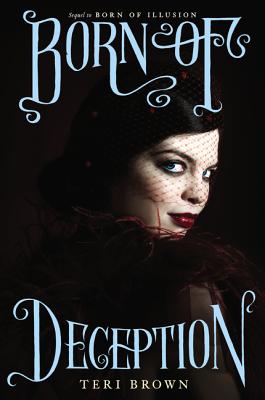 This is book number 2 in the Born of Illusion series.

Perfect for fans of Libba Bray and Anna Godbersen, this thrilling historical suspense novel—and sequel to Born of Illusion—tells the story of a teen illusionist who must harness her special powers and navigate the underworld of magic before her murderous enemies catch up with her.

After scoring a spot on a European vaudeville tour, Anna Van Housen is moving to London to chase her dream and to join an underground society for people like her with psychic abilities. But when Anna arrives, she finds the group in turmoil—one of its members has been kidnapped, and members of the society are starting to turn on one another. Her life in danger and her relationship with her boyfriend, Cole, fizzling, can Anna track down the kidnapper before he makes her his next victim—or will she be forced to pay the ultimate price for her powers?

Lovers of historical fiction and stories filled with romance and intrigue will fall for Born of Deception and its world of magic set in Jazz Age London.

Teri Brown is most proud of her children, but coming in a close second is the fact that she jumped out of an airplane and beat the original Legend of Zelda video game. She is a word scribbler, head banger, math hater, book reader, food fixer, kitty keeper, and city slicker. She is also the author of the Born of Illusion novels. Teri lives with her husband and way too many pets in Portland, Oregon.

“A riveting mix of mystery, romance and history”
— Kirkus Reviews

“Those who became intrigued by Anna and her predicaments, powers, and feelings…will want to see what Brown has in store for this next trick.”
— Booklist

Praise for BORN OF ILLUSION: “Characterization is a strength in this first-person narrative, in which the setting, New York City in the 1920s, is so richly drawn as to become a character in itself …. Will appeal to fans of Libba Bray.”
— Kirkus Reviews

Praise for BORN OF ILLUSION: “Anna’s strong personality and her complex relationship with her mother (who mixes love with professional jealousy), as well as a slightly supernatural romance, provide lots of teen appeal. ”
— The Horn Book